“America’s Mayor” may clean up at ballot box 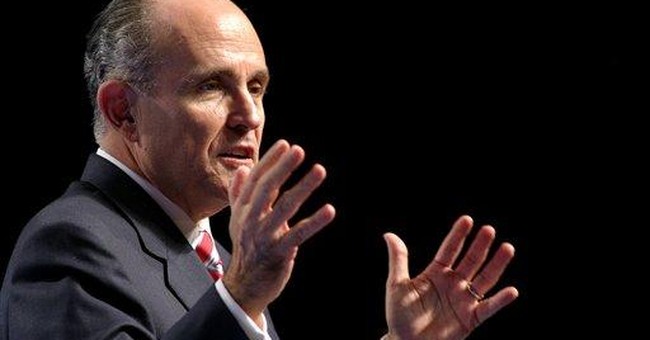 Times Square isn’t what it used to be. That’s a good thing for New Yorkers, and it may be a great thing for Rudy Giuliani’s presidential hopes.

To understand why, we need to look at what New York City is like today, and try to recall what it was like a few years ago. Remembering won’t be easy. After all, Americans tend to have short memories.

When things are good, we assume they must always have been this good, and we expect they will always be this good (or better) in the future. Plus, we tend to assume things were better (much better) back in the “good old days.”

Take unemployment. In 2003, Money magazine noted, “6 percent unemployment was -- in the early 1990s -- considered by many economists to be ‘full employment,’ or labor-market nirvana.” No longer.

Last year, the unemployment rate was 4.6 percent -- lower than what we’d have called “full employment” a decade earlier. Yet if unemployment “ballooned” to 6 percent today, we’d see panic in the streets, or at least on CNBC. Our perception has changed.

So it’s easy to walk the clean streets of today’s Times Square and shop at the high-end specialty stores without remembering what the area used to be like. There isn’t one dirty movie house to be seen, for example, so it’s easy to forget they were commonplace for decades.

Luckily, if we want to remember the old New York, we have a time capsule: the movie “Taxi Driver.” In that 1976 Martin Scorsese classic, Travis Bickle drives his cab around the city, meeting and often giving rides to lowlifes. “All the animals come out at night,” he observes. His job brings him face-to-face with teenage prostitutes and pimps, and when he’s not driving, Bickle spends his time attending movies in “adult theaters,” such as those which used to surround Times Square.

In the film a senator who’s running for president, happens to hop into Bickle’s cab. The candidate asks what a working-class man would want a president to do. “Well, he should clean up this city here. It’s full of filth and scum. Scum and filth. It’s like an open sewer,” Bickle explains. He pines for a change. “Someday a real rain will come and wash all this scum off the streets,” he says.

In reality, there were a few more years of drought in New York. The crime rate remained crippling, and the lowlifes seemed to rule large swaths of the city. But in 1993 Rudy Giuliani was elected mayor. He quickly became the cleansing rain Bickle had hoped for.

It wasn’t surprising that a former federal prosecutor would focus on law enforcement during his early years in office. What was surprising (to many of us, anyway) was how completely his plans succeeded. As Heather Mac Donald of the Manhattan Institute explains in her book “Are Cops Racist?” (her answer is “no,” by the way), under Rudy, the city built what she calls “America’s best urban police force.”

The turnaround happened quickly. Mac Donald writes that “Crime dropped 12 percent in 1994, compared with 1.1 percent in the rest of the country. Homicides fell 19.8 percent, compared with 5 percent nationally. For each part of the next six years, crime continued its free fall.”

During Giuliani’s term, overall crime dropped more than 50 percent, and killings declined by nearly 70 percent. The FBI even named New York the nation’s safest large city. Speaking as someone who got mugged in Times Square during the 1980s, that’s an unexpected, but welcome, change.

And of course, all this happened before Sept. 11, when Giuliani’s leadership in crisis made him “America’s Mayor.”

Today, there are waitresses in bikinis at the Hawaiian Tropic Zone on 7th Ave., but that’s about as risqué as things get near Times Square. The peep-shows and the rest of the petty-crime scene are long gone.

Giuliani may indeed still have some work to do to convince conservatives he’s with us on every issue. But the way he cleaned up New York City would have earned Travis Bickle’s vote, and will no doubt carry plenty of weight with other voters. In an election year when security is certain to be on everybody’s mind, that just might be enough to get him elected president.

Wait...These Are the Top Three Concerns for Democratic Voters? Yes, It's Insane.
Townhall
We regret to inform you that Amnesty International has canceled Alexei Navalny over old 'xenophobic' comments
Twitchy
One Week on, Some Hints Have Emerged About the Future of Rush Limbaugh's Show
Redstate
The Morning Briefing: Biden's Creepy Mask Fetish Isn't a Real Plan To Manage COVID
PJ Media