Let's change more than the tone 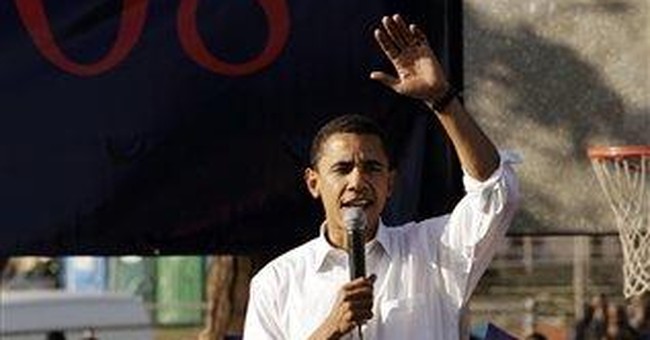 Politicians are taught to speak in soundbites, 15-second clips that will sound good on TV. Consultants insist this is the only way to get a positive message across to a busy electorate, and they may well be correct.

Even if a candidate’s going to use soundbites, though, he ought to lay out some plans to back them up. For example, if a candidate wants to talk about healthcare, it’s fine to say (as Democrat presidential candidate Barack Obama did in his recent announcement address), “Let’s be the generation that says right here, right now, that we will have universal health care in America by the end of the next president’s first term.”

But the devil’s in the details. And Sen. Obama’s Feb. 10 speech rolls on for 2,600 words without offering one plan. In fact, Obama even has the audacity to criticize candidates who dare to lay out an agenda for action. “All of us running for president will travel around the country offering ten-point plans and making grand speeches,” he announced, blithely ignoring the fact that he doesn’t seem to have a plan, 10-point or otherwise, to accomplish anything.

Well, plenty of us want to change the tone. But only as long as those on the left are willing to recognize that they’re overwhelmingly responsible for setting a negative and even dangerous tone. As George Soros, the man who’s pumped hundreds of millions of dollars into liberal causes, told reporters earlier this month, “America needs to follow the policies it has introduced in Germany. We have to go through a certain deNazification process.”

Now, this wouldn’t be surprising coming from some 20-something liberal blogger. Indeed, it’s exactly the sort of comment that stirs up the wilder regions of the Internet day after day. But the speaker here isn’t some ignorant kid who just picked up a drive-by diploma from one of our nation’s failing public schools; this is a man who actually escaped from the Nazis when he was a teenager. He’s witnessed the evil of the Nazis firsthand, and somehow manages to compare that homicidal regime to today’s Bush administration. That takes gall.

Oh, and Soros says he’ll support Obama’s presidential bid. So if the senator wants to change the tone, he could start by asking Soros to rescind his comments.

After all, Obama insists he has learned it’s important “to disagree without being disagreeable.” He says, “We can assume the best in people instead of the worst.” Well, again, maybe the senator needs to review some of the comments on the liberal blogosphere.

His presidential opponent John Edwards recently tried to hire a couple of bloggers. But Edwards apparently wasn’t able to find any who didn’t come with baggage. One of them had written a blog post that asked, “What if Mary had taken Plan B after the Lord filled her with his hot, white, sticky Holy Spirit?” Ick.

The other blogger called conservative Christians “Christofascists.” Both women have since left the Edwards campaign, but it will be interesting to see if any Democrat candidate is able to hire a blogger who doesn’t have a history of over-the-top name calling.

There’s a reversal of reality happening here. It’s become an article of faith on the left that President Bush is a nasty, divisive leader. But where’s the evidence? It seems that one of the biggest complaints against the president is that he refers to the “Democrat” party instead of the “Democratic party.”

But this slight-of-the-tongue hardly qualifies the president as a Nazi. And in fact, the “Democratic party” isn’t always that democratic. Look no further than education reform. Obama tossed out some soundbites about that in his address. “Let’s set high standards for our schools and give them the resources they need to succeed. Let’s recruit a new army of teachers, and give them better pay and more support in exchange for more accountability,” he boldly declared.

But if the senator’s party really wanted to follow the democratic will of the people, it would allow voters everywhere to vote on whether to make school vouchers available to all students. Vouchers are overwhelming popular with parents. However, since Obama’s party is heavily indebted to teacher’s unions (which frequently use divisive Blaine Amendments to oppose vouchers), we’ll wait in vain for the democratic voice of the people to be heard.

Rich Lowry went to see the senator speak in New Hampshire. In the March 5 issue of National Review, he writes that “without a detailed agenda, it will eventually become clear that Obama is running on high-minded clichés.” And soundbites. Plenty of them, and apparently nothing else.