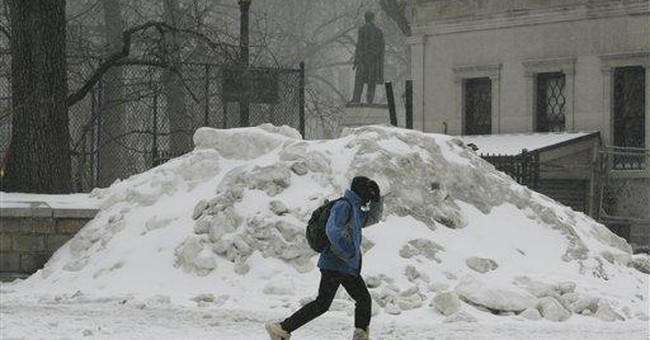 It seems to happens every year. The skies open with a blast of “winter weather” and Washington, D.C., the ultimate company town, throws in the towel.

A dusting of snow is enough to close schools. Icy roads are enough to shutter the federal government.

As the Office of Personnel Management explained on its Web page on Feb. 13, “Road conditions are expected to deteriorate later this afternoon and it is essential to get Federal workers home before dark so transportation authorities can treat the roads.” Thus they were sent home at 2 p.m.

It’s equally predictable that, during the winter storm, somebody will try to explain the shutdowns by hauling out President Kennedy’s famous quote that “Washington is a city of Southern efficiency and Northern charm.” The idea is that, as a bunch of hothouse Southerners, we’re unable to cope with winter weather.

But that gets things exactly backward. We’ve got the ability -- fleets of plows and sand/salt trucks are standing by. Often the roads are completely clear before school is even cancelled. What we lack is the will.

Frankly, it’s easier to cancel school than to venture out in the bad weather. And if the weather turns out to be not that bad (as on Feb. 7, when Fairfax County, Virginia closed schools because of one inch of snow), we’re just supposed to laugh and celebrate the fact that the kids get an extra day off from school.

But our tentativeness has consequences. Children learn by example, and we’re teaching them to fear the weather. A people who once braved blizzards, droughts, searing heat and bone-chilling cold to conquer a continent are now afraid to send their kids out the door into an inch of snow. In fact, no matter what the weather, we’re afraid to send the kids out at all.

Recently, a friend forwarded a chain e-mail that actually made a good point. Children born before 1980, it noted, “would leave home in the morning and play all day, as long as we were back when the streetlights came on. No one was able to reach us all day. And we were O.K.”

In fact, we thrived. “We had freedom, failure, success and responsibility, and we learned HOW TO DEAL WITH IT ALL,” the e-mail continued. “These generations have produced some of the best risk-takers, problem-solvers and inventors ever. The past 50 years have been an explosion of innovation and new ideas.” That’s true. Which makes me wonder if today’s generation, raised to quiver before Mother Nature, will be quite as creative or successful.

It would be bad enough if our fear stopped at the water’s edge. But it doesn’t. Our deployment to Iraq sadly mirrors Washington’s reaction to a little bad weather.

Nobody can doubt that, if the United States truly wanted to, we could win in Iraq, no matter how one defines victory. Our military certainly has the power to crush any insurgency. We’ve got all the tanks, planes, helicopters and trained troops. Our enemy is a rag-tag group of “fighters,” most of whom are afraid to even show their faces.

They hit-and-run, attacking with snipers or roadside bombs instead of slugging it out with our troops, because they know if they went toe-to-toe they’d be destroyed in days. That’s also why they prefer to hit civilian targets: They’re easier to get at and less likely to fight back.

So the question isn’t “are we able to succeed,” it’s “do we have the will to succeed?” That’s an open question, and a critical one. Here’s why:

In his book “Dangerous Nation,” Robert Kagan wrote that, at the dawn of the 20th century, Theodore Roosevelt and others believed that “advanced liberal commercial societies like the United States were in danger of losing the martial spirit necessary to defend themselves.” That’s exactly what’s come to pass.

Think of it this way -- just 100 years ago, even small countries such as Portugal, Belgium and the Netherlands effortlessly sent troops to the far reaches of the globe, where they conquered and held colonies. For better or worse, people everywhere feared and respected what Kagan calls “liberal commercial societies.”

Today, the tables have turned. Only a handful of countries are capable of deploying troops overseas, and few are willing to actually do so. Meanwhile our enemies -- radical Islamists -- can easily project power anywhere at any time.

They’ve shown they can raze buildings in New York, destroy trains in London and Spain and blow up nightclubs in Bali. Along the way they’ve killed thousands of civilians, in Iraq and around the globe.

As T.R. feared, we’ve reached a turning point in history.

The war in Iraq and the weather outside are, in one sense at least, both tests of American will. We’ve already failed one. We can’t afford to fail the other. The world is watching.