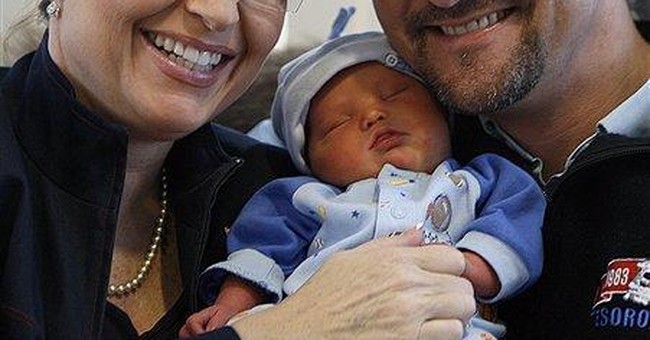 Perhaps nothing Sarah Palin said in her boffo address at the Republican Convention had as much resonance as her statement that "sometimes even the greatest joys bring challenge."

That truism was redeemed from mere Hallmark-card sentimentality because everyone knew that Palin's 17-year-old daughter, Bristol, is pregnant and that Palin herself gave birth to a boy, Trig, with Down syndrome in April. The joys in the Palin household lately have been particularly leavened with challenges.

Palin's choice to give birth to Trig after she learned of his condition 13 weeks into her pregnancy endeared her to pro-lifers and contributed to the frenzied excitement among social conservatives about her selection. The national stage she's now been given means her choice could have much wider significance and constitute an enormous symbolic leap ahead for children with Down syndrome and their parents.

As many as an estimated nine out of 10 children with Down syndrome are aborted in the womb, sought out by increasingly sophisticated prenatal tests and eliminated as too flawed, too burdensome, too different to live. This is the ugly eugenic underbelly of American life, even as we congratulate ourselves on our tolerance and diversity.

Parents of children with Down syndrome routinely encounter a "how could you?" disapproval. Former Washington Post reporter Patricia E. Bauer writes that strangers consider her daughter with Down syndrome as falling "into the category of avoidable human suffering. At best, a tragic mistake. At worst, a living embodiment of the pro-life movement. Less than human. A drain on society. That someone I love is regarded that way is unspeakably painful to me."

Here comes Trig, who -- via his mother, especially if she wins -- will have a high-profile platform to expose the rest of us to his personhood and dignity. Palin always describes him, aptly, as "a perfectly beautiful baby boy." After her speech, she held him on stage as she was joined by the rest of her family. Given how dated assumptions are about Down syndrome, he could do us much good growing up in the Naval Observatory.

It used to be that children with Down syndrome were institutionalized at birth. Without the love, care and education that any child needs, they lived stunted lives. Now, a generation of people with Down syndrome has been raised by families that love them. Advances in medical care and education mean they live full lives. Their capabilities differ -- as is the case with everyone -- but they graduate from high school, hold jobs and live on their own.

When Palin received the news about Trig, she was devastated and scared. She kept it to herself, until her husband got back from a business trip and she confided in him. They didn't tell anyone else, including their other children. "Not knowing in my own heart if I was going to be ready to embrace a child with special needs," she told People magazine, "I couldn't talk about it." It wasn't until he was born that she says her fears washed away.

No one should trivialize the challenges Trig and the Palins will face. About 40 percent of children with Down syndrome are born with a heart defect. There will be the cruelty -- intentional or not -- of other children and the frustrations of struggling with tasks that come so much easier to others. And yet there will be the joy, as unalloyed and precious as any of us experience.

Palin said in an interview shortly after Trig was born: "I'm looking at him right now, and I see perfection. I keep thinking in our world, what is normal and what is perfect?" That is the subversive promise of children like Trig, undermining all our superficial assumptions about what's truly important.

The Palins will have a humbling, heartbreaking and inspiring lesson in life's priorities from Trig. Here's hoping it's one that, one way or the other, the rest of us share.