The Clintons and their -ism 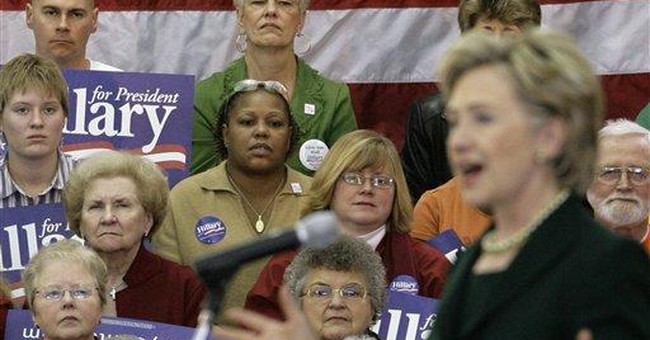 It is the curse of Clintonism that it is associated with the Clintons.

A centrist-oriented Democratic politics that is pragmatic and economically literate is better than the alternatives: a fluffy politics of hope (Barack Obama) and angry politics of anti-corporate zeal (John Edwards). At least on paper.

For the champions of this otherwise preferable approach are Bill and Hillary Clinton. As individuals, they have their strengths and weaknesses, as do any talented, but flawed, politicians; as a team, they tend to be a roiling mess, with something to repel everyone lately.

Bill has supplemented Hillary's tightly wound discipline with his out-of-control ego, her off-putting devotion to script with his wild and dishonest improvisations, her inability to project warmth with his self-adoring affability. What they have always held in common is ambition and willingness to resort to any means -- sheathed in self-righteousness -- to achieve power.

Throughout the 1990s, their attacks were directed at people who were vulnerable by virtue of their status as allegedly self-interested women accusing Bill of misconduct, or as conservative politicians hated by the press, or as special prosecutors whose work was distasteful to the public. They all turn out to have been easier targets than Obama, a winsome African-American liberal.

The Clinton targets of the 1990s could be portrayed as aggressors. Obama's offense is opposing Hillary for the nomination, making the flailing attacks against him seem the product of an outraged sense of entitlement. Hitting Obama for a kindergarten essay is pathetic; knocking him by suggesting he once might have dealt drugs is pathetic and slimy.

The unbecoming broadsides against Obama can only remind people of what they disliked about the decade to which Hillary promises a glorious return. Along with the peace and prosperity that Hillary wants the public to associate with the 1990s came a "politics of personal destruction" (on both sides) that curdled into her husband's impeachment. All of that was the direct antecedent of the hate-filled and tiresome Bush wars. Hillary can't help being connected with the worst as well as the best of the 1990s, since she is married to them.

As potential first spouses, Obama has Michelle, an elegantly beautiful woman who would be the Jackie Kennedy of her husband's new media-conjured Camelot, while Edwards has Elizabeth, a combative cancer survivor. Hillary has Bill, a former president prickly about his legacy who will surely be tempted to try to make her presidency all about his vindication.

George W. Bush's presidency was made more psychologically complex by the fact that his father, George H.W. Bush, was one of his predecessors. Imagine if W. had had to try to run the government together with H.W. "Oedipal city," as his dad might have put it. A Hillary administration promises all that fraught emotional tension and more.

Even now, no one can quite figure out whether Bill is trying to sabotage her with his off-message bloopers, or is vesting everything in her victory as the ultimate vindication of self. What will his role be in her administration, how will it change with the vagaries of their marriage, and who will be right when they say conflicting things about policy?

Who knows, and who can blame anyone for wanting to think about something else? Clintonism delivered the White House to the Democrats twice in campaigns in 1992 and 1996 that hewed to the middle and made the party more appealing than it had been in decades. But no one else has picked up the mantle nationally.

Al Gore would have been the natural ideological successor in 2000, but angered by Bill's spectacularly irresponsible conduct in office, he distanced himself and lurched left. Since the left-wing base of the Democratic Party never liked the Clinton pragmatism, the only ones with support in the party strong enough to maintain a relative centrism are the Clintons themselves.

And so the devil's bargain: Clintonism comes only with the Clintons attached.