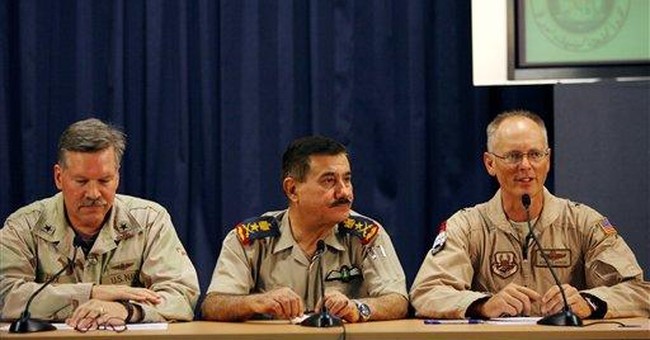 Forget the briefings from generals, the intelligence evaluations and the Pentagon status reports. There is a handy indicator for whether the war in Iraq is going well -- its relative absence from the front pages.

During the past month, the country's top newspapers have splashed Iraq stories on Page A-1, but most of them have had to do with the scandal concerning the security contractor Blackwater and the impending (but yet to materialize) Turkish invasion of the Kurdish north. Reports on major trends in the war tend to be relegated to inside pages because -- from the blows dealt to al-Qaida, to the rise of Sunni security volunteers, to Muqtada al-Sadr's cease-fire -- they have been largely positive.

In Israel, there's a law that bans reporting on sensitive national-security operations; you could be forgiven for thinking that the U.S. has a similar ban on any encouraging news from the hottest battlefront in the war on terror. The United States might be the only country in world history that reverse-propagandizes itself, magnifying its setbacks and ignoring its successes so that nothing can disturb what Sen. Joe Lieberman calls the "narrative of defeat."

In an incisive account of the surge in the new issue of The Weekly Standard, military analyst Kimberly Kagan writes: "The total number of enemy attacks has fallen for four consecutive months, and has now reached levels last seen before the February 2006 Samarra mosque bombing. IED explosions have plummeted to late-2004 levels. Iraqi civilian casualties, which peaked at 3,000 in the month of December 2006, are now below 1,000 for the second straight month. The number of coalition soldiers killed in action has fallen for five straight months and is now at the lowest level since February 2004."

Seemingly every day brings a new encouraging number. The latest is that rocket and mortar attacks in Iraq have fallen to their lowest level in nearly two years. The left's initial reaction to the surge's success in reducing violence in Iraq was to declare Gen. David Petraeus a liar. Now, a new tack has become necessary -- finding creative ways to deny credit to the surge. Democrat Rep. David Obey from Wisconsin says insurgents are simply "running out of people to kill."

So between January and today everyone who could die in violence in Iraq perished? This is childish. It is true that the ethnic cleansing in Baghdad neighborhoods, once it is complete, creates a perverse kind of stability. But the reduction in violence has happened all around the country, in all-Sunni areas as well as in areas in parts of Baghdad that are still ethnic fault lines.

As Kagan writes, U.S. forces interposed themselves between warring factions in Baghdad, and on the outskirts of the city, attacked al-Qaida strongholds. This is why American casualties went up earlier this year and now -- with al-Qaida on the run -- are back down. As security has taken hold, the Sunnis have felt comfortable partnering with American forces to battle al-Qaida.

Defeating the terror group has been a consensus goal of all sides in the Iraq debate. Now that some U.S. commanders consider al-Qaida in Iraq all but routed, Democrats should be delighted. Instead they avert their eyes from the signal accomplishment of the U.S. military during the past year. Troops have never been so notionally "supported" by everyone, while having their accomplishments so ignored.

The political reconciliation that is so important to Iraq's long-term stability has yet to take place, but the first, necessary step is to get Iraqis to stop resorting to violence to resolve their differences. And whatever comes of Iraq, eliminating al-Qaida in Iraq is a desirable goal in its own right.