The Plight of the Halfway Republican 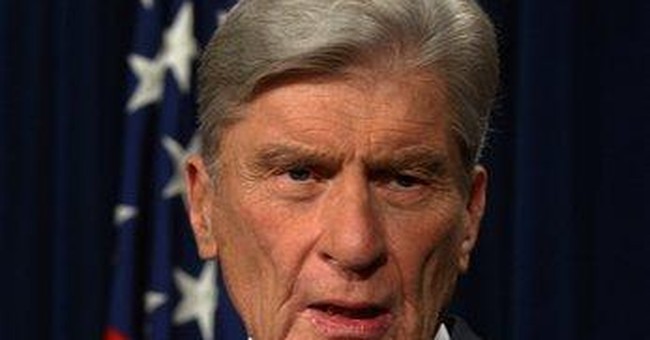 There is an easy way for a Republican senator to burst from semiobscurity to the front pages -- offer a compromise plan on Iraq.

Sens. John Warner (Virginia), Dick Lugar (Indiana) and Lamar Alexander (Tennessee) have all done it. Warner even double-dipped. He had dissented from President Bush's Iraq policy in July by sponsoring a compromise plan with Lugar, and then garnered headlines in August for a much-hyped break with Bush that was only a continuation of his previous break. How many times can a senator break with the president until he just stays broken?

No contribution to the Iraq debate is as analytically pathetic as that of these halfway Republicans. Their reflex toward compromise -- honed in their collective 12 terms in the senate -- leads them to believe that any problem can be negotiated away, so long as enough members of the world's oldest deliberative body get together to deliberate earnestly (and a little pompously).

They usually are right when it comes to hospital reimbursements under Medicare or the level of funding for the Richard B. Russell National School Lunch Act. But not when considering war strategy in a conflict 7,000 miles away, where terrorists, tribal leaders and Iranian agents won't conform to the just-so assumptions of Washington lawmakers.

In August, Warner called for pulling out 5,000 troops by Christmas, on the theory that Iraqi Prime Minister Nouri al-Maliki will be likelier to perform if we make a gesture toward leaving. As if Maliki were fated to be ineffective with 160,000 U.S. troops in country, but might bridge the country's sectarian divides if we went down to 155,000.

Warner maintains that the withdrawal also would say to bordering nations, "Why don't you try to help the United States of America resolve this problem?" We are supposed to believe Syria and Iran will foment chaos in Iraq when we have 160,000 troops, but when we are at 155,000, they will suddenly favor a stable democracy allied to the United States?

All the compromises propose that we stop policing a sectarian civil war and focus on counter-terrorism, training the Iraqis and increasing diplomacy. This means ending our combat role (i.e., "re-deploying"), but still supposedly achieving everything deemed desirable by the halfway senators (the defeat of al-Qaida, the establishment of effective Iraqi security forces and regional stability).

Would that the world were so susceptible to magical thinking. Once we end our combat role, the Iraqi civil war likely will spin out of control, benefiting extremists on both sides. If Iraq is fragmented and its government ineffectual now, just wait until the goons with guns again fill the security vacuum left by our pullback.

Halfway senators profess to be in favor of counterterrorism in Iraq, but oppose the surge that is the only effective form of counterterrorism. Since al-Qaida is waging a terrorist insurgency in Iraq, it must be combated with manpower-intensive counterinsurgency operations. The terror group does not have the consideration to form large bases vulnerable to B-52 attacks.

The training mission would be just as endangered. Our trainers in Iraq are dependent on combat troops for the support structure, force protection and rapid-reaction capability that they provide, and as a practical matter, working alongside our combat troops is the best training for the Iraqis.

As for the "diplomatic surge" that would replace the military surge, the administration already is fostering Israeli-Palestinian negotiations, forging tighter ties with the Gulf states and meeting with the Iranians on and off to ask them to stop killing our troops -- to no avail.

Sen. Alexander says, "It is inexcusable for United States senators to be lecturing Baghdad about being in a political stalemate, yet we can't come up with a consensus ourselves." Except there is no consensus to be had. We either continue with the surge, or give up on the war. Senators trying to find a halfway solution entice the headline writers, but demonstrate only their own self-involved irrelevance.