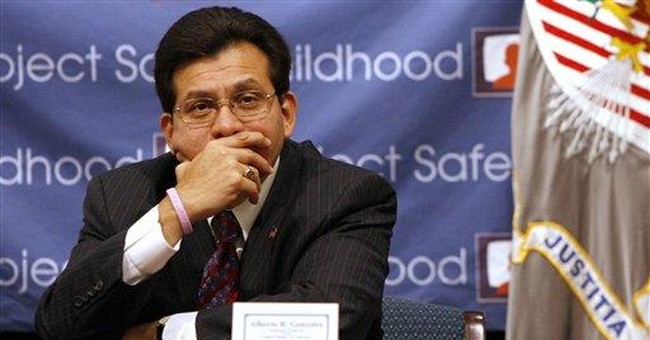 Alberto Gonzales became intimately familiar with what departing White House adviser Karl Rove calls "the mob" -- the howling mass of Democratic members of Congress, bloggers and media commentators who despise all things Bush. His tenure as attorney general, and now his departure, represent a triumph for the mob.

The mob doesn't win only when it chases a target from office. It also scores a subtle victory when it forces the administration to keep in office an ineffectual or politically wounded official to demonstrate that it won't get pushed around by its frenzied detractors. Thus, Gonzales remained attorney general long after everyone but President Bush had decided that he was ill-suited for the job. The administration suffered months of unnecessary embarrassment as it stuck by Gonzales on the theory that giving in to the mob would be worse -- only to see Gonzales resign anyway.

The timing of Gonzales' departure is reminiscent of Don Rumsfeld's. The secretary of defense's mishandling of the Iraq War extracted the maximum possible political damage prior to the 2006 elections, and he left the day after. The mob targeted Rumsfeld, and so did retired generals whose criticisms made Bush think that keeping Rumsfeld made an important statement about civilian control of the Pentagon. Bush defied Rummy's detractors, but only at a grave cost to himself; if he had forced him out earlier, Republicans might have held the Senate.

Gonzales never should have been selected as attorney general in the first place. His appointment speaks to a sentimentality on Bush's part. He loved Gonzales' story of growing up with parents who were migrant workers who never finished elementary school, then his going on to graduate from Harvard Law School. Bush trusted and liked him, and that -- as happened with other members of his Texas inner circle -- blinded him to his friend's limitations.

Little did Bush realize the disservice he had done Gonzales. When the controversy broke over the entirely defensible firings of eight U.S. attorneys, Gonzales couldn't defend them, repeatedly victimized by his own carelessness with language and facts. His explanation of how an internal administration fight went down concerning the legality of a National Security Agency surveillance program was better, but still fuzzy enough for congressional Democrats to smear him as a perjurer.

Besides its impulse not to validate critics, the administration held on to Gonzales for fear of the difficulty of getting a replacement confirmed. Congressional Democrats reacted to his departure as if it were part of a cover-up of whatever vague crime they believe was committed at the Department of Justice. They will seek to exert the maximum possible concessions from the White House for the release of documents related to the firings and the NSA program in return for confirming a new attorney general.

The administration should do what it should have done all along -- nominate the most capable lawyer it can find and trust that the strength of its case will eventually win out, both on the merits of the controversies left over from Gonzales and the document fights. Hiring and firing U.S. attorneys is a core executive function over which Congress has no say and limited legitimate oversight function. As for the NSA program, Congress has validated the heart of it in a temporary law passed this past month, and the administration is on strong political grounds defending it.

Perhaps Congress won't relent, but if the nominee is obviously qualified and can joust effectively with his tormentors, perhaps the mob will be embarrassed for once instead of the administration. In any case, there could be worse things than keeping Solicitor General Paul Clement in the top job; he is slated to become acting attorney general and is widely considered one of the smartest people in government.

The Gonzales case is sad all around: for what happened to the reputation of a decent man over-matched by his responsibilities; for the distraction at a crucial department of government; and for the blood-lust that masquerades as political opposition in Washington. But it's never very edifying when the mob wins.