Michael Moore's "World of We" 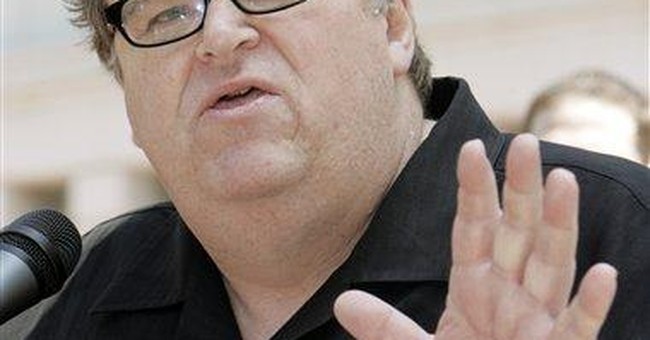 Michael Moore set out to make a movie attacking the American insurance industry and ended up attacking the American character. By the end of his movie "SiCKO," his plaint is less about American resistance to government-run health care than its overarching rejection of collectivism. As Moore puts it, everywhere else it's "a world of we," but here a "world of me."

His voice thus joins a vast, age-old chorus of left-wing bafflement and disillusion at American exceptionalism -- our national traits that have prevented the development of a statist politics along continental European lines. Moore's explanation for this phenomenon is typically twisted: Americans are saddled with debt from college loans and health care, and that keeps us from demanding French-style pampering from our government for fear of foreclosure by The Man.

ellingly, Moore picks up this theory in an interview with Tony Benn, an old-school British socialist of the sort who simply doesn't exist in the U.S. Here, our left-wing politicians vote for war funding before they vote against it, always trimming to keep from rubbing too strongly against the American grain. Moore fervently wishes that grain were different, and he celebrates all countries where government has a vaster reach and tighter grip -- from Cuba to France.

He is practically the Leni Riefenstahl of socialism. Anyone in a country with government-provided health insurance is portrayed as tripping through daisies to the hospital, where everything is free and the care is perfect. America, in contrast, is a vista of unrelieved gloom. Moore is adept at the propagandist's art -- keep it simple and keep it dishonest.

You would never know that America ranks highest in the world in patient satisfaction, or that only about half of emergency-room patients in Canada get timely treatment. This is not to say that Moore doesn't highlight real problems in the American insurance system -- which is badly distorted by the fact that most people get their insurance through their employers -- but his complaint goes much deeper: Americans don't have the "free" things of the French, who not only get lots of paid vacation, but have government nannies come to their homes to do their laundry for them after they have children.

Moore hints at -- of course -- a conspiracy to try to keep us from liking the French for fear that we too will develop a taste for the good life on the government's dime. Unfortunately for Moore, it's worse than that. America has a deep-seated individualistic value system that, coupled with the lack of European-style class conflict, inhibited the rise of social democracy here. As one historian has put it, if you were to set out to design a society hostile to collectivism, "one could not have done much better than to implement the social development that has, mostly unplanned, constituted America."

This exceptionalism has its downsides -- our high rates of violence, for one -- but it also has created a extraordinarily dynamic and open society that can adjust to and thrive in the globalized economy in a way that sclerotic social democracies can't. Just as Moore is apotheosizing France, its people took to the polls in near-record numbers to elect a reformist president devoted to making them work harder and weaning them from cushy benefits. In this sense, Michael Moore is more French than the French.

He hails the street protests that engulf France every time the government threatens to take away some benefit. We don't match the French in demonstrations, but once established, our government programs are just as fiercely defended. Liberals agitate for more government programs knowing that they create their own self-perpetuating constituencies and chip away at our culture of self-reliance. For now, that culture is still robust, as American exceptionalism remains stubbornly exceptional.

If you really want sweeping French-style social-welfare programs and repressive tax rates, your only alternative is to, like the American expats Moore glorifies in his movie, move to France.