Abandoning the Fight Against al-Qaida in Iraq 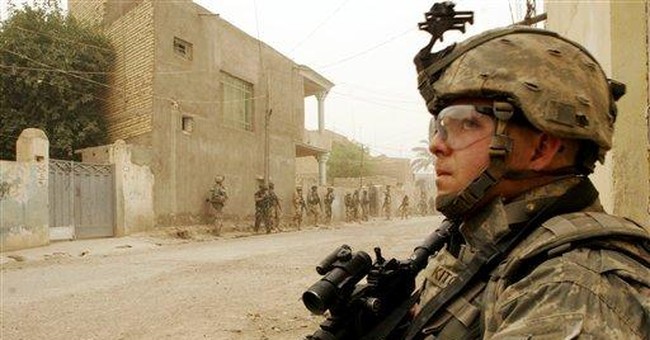 This is a sentiment that the Iraqi trader felt safe to utter as a visiting U.S. general passed by, according to John Burns of The New York Times, only after a furtive glance "up and down the narrow refuse-strewn street to check who might be listening." In a microcosm, this is the reason why we are finally making progress against al-Qaida in Iraq. The protection afforded by American combat power has made it possible for Iraqis in Sunni areas to turn against the terror group.

In a global struggle against Islamic extremism, it is an incontestably welcome development that ordinary Sunnis in the Arab heartland are spurning al-Qaida. The extremist group has been on a campaign of savagery in Iraq that has discredited its own cause. The grassroots revolt against it means that it is within our reach to deny al-Qaida its most important current geopolitical objective, which is plunging Iraq into a bloody chaos in which it can thrive.

But a group of Republican senators have picked precisely this moment to call for deconstructing the troop surge that has begun to give us the upper hand against al-Qaida. They thus reveal a key dishonesty in the debate over the war. Everyone professes to want to fight al-Qaida in Iraq -- as opposed to policing the sectarian war -- but the number of politicians willing to support the means to that end is ever-dwindling.

Al-Qaida relies on intimidation to impose itself on the Sunni community, and succeeds unless driven back by a stronger force, i.e. the U.S. military. In his report from Anbar province, John Burns notes that the Sunni "sheiks turned only after a prolonged offensive by American and Iraqi forces, starting in November, that put al-Qaida groups on the run." He continues, "Iraqis, bludgeoned for 24 years by Saddam Hussein's terror, are wary of rising against any force however brutal, until it is in retreat."

This experience has been replicated in precincts of Baghdad, Diyala province and other Sunni parts of Iraq, but the Republican senators want American forces, rather than al-Qaida, to do the retreating. Advocates of various forms of withdrawal argue that we can fight al-Qaida from our large bases or from Kurdistan. This is a fantasy that ignores that we are waging a counterinsurgency war against al-Qaida that requires on-the-ground relationships with key players and knowledge of the terrain.

And the main "compromise" proposal -- adopting the recommendations of the Iraq Study Group -- would have all American combat troops out of Iraq by the end of March 2008. It is self-evidently impossible to fight al-Qaida in Iraq without any combat troops to do it. What all those abandoning the surge essentially want is a return to the old failed Rumsfeld strategy of prematurely drawing down and handing over to unprepared Iraqi forces.

The surge has succeeded in reducing sectarian killings in Baghdad and civilian casualties overall, but at the cost of increased U.S. casualties and without the Iraqi legislative accomplishments that were established as "political benchmarks." Those benchmarks shouldn't be fetishized. The reason that they were considered so important is that they were thought necessary to entice Sunnis away from the insurgency. Instead, the Sunnis have swung our way anyway, in reaction to al-Qaida brutality and to our strength.

By any measure, this is significant political progress -- so significant, in fact, that no one even considered making it a "benchmark" at the beginning of the year. The U.S. political argument over benchmarks is shot through with bad faith anyway. Would the advocates of retreat really have a different position if the Iraqi parliament had managed to pass an oil-revenue-sharing law already? Unlikely.

Once again, all depends on President Bush. Senators of his party are ready to quit Iraq with al-Qaida undefeated. Is he?