If You Can Make It There...So What? 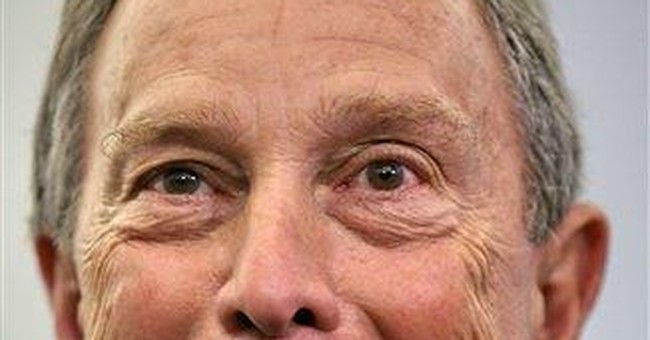 The conceit of New York is, as the song goes, that if you can make it there, you can make it anywhere. If he goes through with an independent presidential run, Mayor Michael Bloomberg will discover this is merely New York provincialism.

Bloomberg is shrewdly riding a wave of interest in his possible candidacy, shedding his Republican party affiliation that he had only adopted in 2000 in the first place so he could buy the GOP mayoral nomination. Changing his registration to independent has stoked a round of admiring press coverage that will continue until he gets in or (more likely) stays out.

The frenzy highlights one of Bloomberg's undeniable strengths: public relations. As Fred Siegel -- author of the favorable study of Rudy Giuliani's mayoralty, "Prince of the City" -- argues, Bloomberg has an image of a master technocratic manager, when as mayor his real success has been political.

He basically has been a caretaker mayor -- consolidating Giuliani's accomplishments -- while placating the city's interest groups, keeping a healthy 70 percent approval rating and getting national press coverage that soon might be almost as positive as Barack Obama's. (For those keeping score at home, that would make Bloomberg the Third Coming.) That's a pretty neat political trick for a billionaire businessman widely discounted when he first ran for mayor six years ago.

But is it what the nation needs? Not unless the country lacks for overhyped but middling leadership. Eventually, a national run would bring unwelcome scrutiny to Bloomberg's thin record. He scored a major triumph when he gained mayoral control of the public schools, but hasn't done much with it. At the same time as he's been pushing to reform the schools, he has showered money on the recalcitrant teachers' unions.

An axiom of Bloomberg's political success is that a lot of cash goes a long way. He has poured hundreds of thousands of dollars of his personal money into GOP coffers, and that's not all. "As he geared up for re-election in 2005, he donated at least $140 million to more than 800 institutions and groups," Fred Siegel writes in The Weekly Standard. His governance has operated basically on the same principle, as he has increased city spending at twice the rate of inflation.

Being a popular mayor of a basically contented city is hardly nothing, but it doesn't justify a Time magazine cover story (shared with Arnold Schwarzenegger) hailing Bloomberg as the answer to Washington's discontents. Bloomberg is doing "big things," Time contends.

It cites his advocacy on global warming. Undeniably a big issue, but what's so big about what Bloomberg has proposed? Congestion pricing for city traffic at peak hours? At the end of the day, it might not even happen. More bike lanes? Hybrid taxi cabs? This is municipal minutiae. It is not as meaningless as declaring New York a global-warming-free zone -- as cities did with nuclear weapons in the 1980s -- but its not going to drop global temperatures either.

Bloomberg's other signature initiatives -- bans on smoking and trans-fats -- fall in the same category. They are either worthy public-health measures or worrisome nanny-state intrusions, depending on your view, but they also are excruciatingly fashionable and not terribly consequential.

None of this is to deny the appeal of Bloomberg's nascent national message of competence and nonpartisanship. But partisan conflict is inevitable. On issues like global warming, consensus answers like more bike lanes quickly give way to contentions over policies that reflect the differing philosophies of government represented by each political party.

These differences can't be massaged away, and if Bloomberg is forced to commit himself one way or another on big issues, he won't look so alluringly nonpartisan anymore. Given that he has no burning political cause, lacks a common populist touch and has displayed at times a Bush-like unwillingness to admit obvious mistakes, Bloomberg would be on a fool's errand to run for president.

He made it in New York. That should be enough.