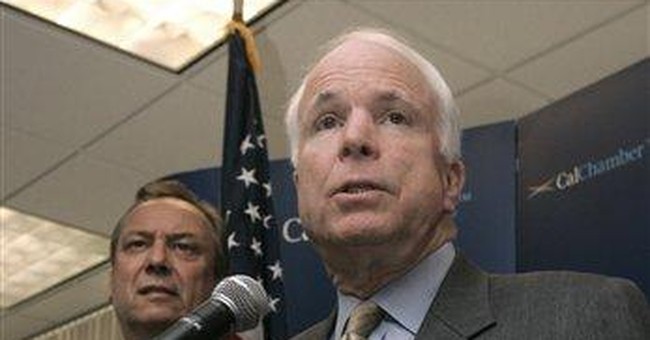 Journalists spent months explaining how Sen. John McCain's stalwart support of the Iraq War would sink him in the Republican presidential primaries -- and it didn't. Then, they swooned over McCain's performance in a New Hampshire debate where he vigorously defended the Senate immigration bill -- and his numbers have been falling ever since.

The journalistic interpretations of McCain always lack the crucial context of how living, breathing Republicans -- you know, those people you can't find in many newsrooms -- might be reacting to him. And sometimes it seems that the McCain campaign lacks that context as well. In two presidential campaigns now, McCain has proven himself adept at what is becoming his signature maneuver: the suicidal assault directly into the teeth of key Republican interest groups and beliefs.

In 2000, McCain could have scored a monumental upset over then-Texas Gov. George W. Bush if he had gotten to his right on a few issues -- in other words, if he had done more to appeal to Republican voters. Instead, McCain famously alighted to Virginia Beach, Va., to denounce leaders of the Christian right as "agents of intolerance," dooming his already-diminished chances of winning the nomination and doing himself lasting damage with conservatives.

This year, McCain's kamikaze charge is on comprehensive immigration legislation that couples an amnesty for illegal aliens with border-enforcement measures. You have to have only a passing acquaintance with a Republican voter or two to know this is deeply unpopular in the GOP.

Rudy Giuliani practically declared New York a sanctuary city for illegals when he was mayor, but now tough border enforcement is the second of his "12 commitments." Support for an amnesty used to be a hallmark of Sen. Sam Brownback's self-styled Christian statesmanship, but he dumped it soon after he started running for president. And former Massachusetts Gov. Mitt Romney flip-flopped from pro- to anti-amnesty.

McCain himself wobbled. He seemed ready to jump from his support for a comprehensive bill, but when the Senate cut a deal a month ago, he traveled back to Washington for the press conference. In the face of a firestorm against the bill, he gave a speech in Miami defending it. When the bill seemed to die in the Senate -- giving his campaign a reprieve by potentially dampening the issue -- McCain worked to revive it.

McCain's position is indisputably sincere and courageous. But it is only reminding Republicans exactly what they don't like about his sincerity and courage. One man's bravery is another's obstinacy. Once considered the front-runner in the race, McCain is now tied for third nationally with Romney at 14 percent in the new NBC/Wall Street Journal poll and has dropped to as low as 11 percent in a Rasmussen survey.

The tricky thing about political leadership is that it has to involve some followership, too. Mitt Romney would have no chance to lead the Republican Party as a relatively moderate Northeasterner, because that's not where the Republican Party is. Nor would Rudy Giuliani, which is why he has distanced himself from many of his positions as mayor (although in not as jarring a fashion as Romney).

McCain's record is more conservative than that of both of those rivals, but, temperamentally, he's a go-it-alone crusader. That's not a good fit for leading a political party. McCain's political persona says, "Here I stand, I can do no other." The emphasis is always on his personal honor and integrity. When he was crusading for campaign-finance reform, McCain seemed to disdain political parties and offered in contrast his lone voice of righteousness.

This maverick spirit can be tremendously appealing. It fueled his 2000 bid, even as it ensured it fell short. It's too early to write anyone's political obituary. The flaws of the other Republican presidential candidates are so manifest that McCain could yet come back. But who can doubt that when John McCain essentially says he'd rather be right than president, he means it, and it could prove prophetic?