Hillary Vs. the "On Your Own" Society 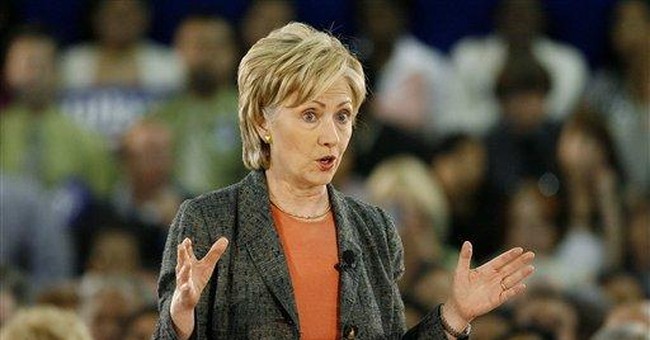 Hillary Clinton has identified a grievous flaw in the contemporary American economy: It leaves "it all up to the individual." This hateful individualism is allegedly driving income inequality and destroying the American Dream.

Clinton calls it "the 'on your own' society," displaying a liberal Democrat's curious aversion to people doing things on their own. In contrast, she offers a collectivist vision of "shared responsibility for shared prosperity," making the case for it based on a farrago of mistruths about the state of the economy. She actually is not interested in sharing anything, but instead hogging all the credit for economic growth in the 1990s for her husband and, by extension, herself.

Clinton cites figures to paint a picture of an immiserated middle class, but avoids the main event. As Democratic economist Stephen Rose notes in his new book, "Social Stratification in the United States," once people outside their prime working years are excluded -- the elderly and the young -- the median income for an American family is $63,000. Which, in the words of The Washington Post, "in most parts of the country buys a pretty comfortable middle-class lifestyle."

She maintains that corporations are taking more and more of national income for themselves, leaving workers in the cold. But according to Alan Reynolds of the Cato Institute, labor's share of national income was a nearly constant 64.9 percent from 1960 to 2006. She says "the percentage of taxes paid by corporations have fallen," when the percentage of taxes paid by corporations was 11.5 percent in 2006, higher than it was in 2000, at 8.2 percent.

Clinton portrays the 1990s as a Paradise Lost that only she and her policies can rediscover. She wants "to hit the restart button on the 21st century and redo it the right way." Like not having a tech bubble burst after it grew to unsustainable proportions in the late 1990s? Like not suffering from corporate scandals that stemmed from loose practices in the same period?

No one can deny that the 1990s were good, but they wouldn't hold up to the kind of demagogic critique of the economy Hillary makes now. She says we can't "get tough" on China because of our debt, but President Clinton too was "soft" on China -- all recent American presidents have had basically the same policy toward Beijing. She complains of CEO compensation increasing, but it grew right through the 1990s. In fact, former Clinton Labor Secretary Robert Reich has made a Hillary-esque critique of the 1990s economy: "Most of the gains from the 1990s boom went to the people at the top."

The real news from Clinton's speech is the way she, in keeping with the leftward shift of her party, turns her back on her husband's actual policies. It is too inconvenient for her to explain the sources of the deficit reduction in the 1990s besides his (relatively inconsequential) tax increase: first, Clinton's huge cut in defense spending; then a budget deal with Republicans that reduced the rate of growth of Medicare and cut taxes on capital gains; then, a wondrous flow of revenue into the federal treasury from capital gains and the "rich getting richer."

She doesn't even mention welfare reform, although it is largely thanks to it that the bottom fifth of families had a 35 percent increase in income from 1991 to 2005. She talks of free trade as something to fear, when President Clinton courageously championed NAFTA and other free-trade initiatives, providing boosts to the U.S. and global economies. Of course, she leaves out all the deregulation and how important it was that President Clinton let Federal Reserve Chairman Alan Greenspan pursue his low-inflation policies without political interference.

None of this fits into her narrative of an economy needing wide-ranging government intervention to escape the nefarious consequences of individuals left to act "on their own." One can only conclude that if you liked the 1990s boom, don't elect this woman.