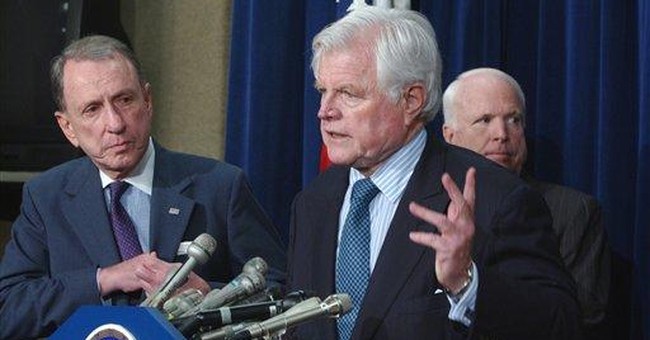 The U.S. has now constructed .286 percent of the 700 miles of fencing on the southern border provided for in 2006's Secure Fence Act. That is sufficient for a bipartisan group of senators to want to effectively declare this brief national experiment with immigration enforcement effectively over.

Enough with the harsh exclusionary measures! Two miles of fencing out of 700 passed by Congress on a border stretching 1,952 miles is a milestone that should mark our departure to the next phase of immigration policy -- a sweeping amnesty of illegals and an increase in legal immigration. Thus, another confirmation of the iron rule of the nation's immigration politics: No matter how discontented the public is with our broken immigration system, the political elite's answer is always higher levels of immigration.

Rep. Duncan Hunter, R-Calif., noted at the second Republican presidential debate that the Department of Homeland Security has $1 billion for the fence, but "they want to drag their feet and hook this up with amnesty." Give him points for clairvoyance. The sweetener luring some conservative Republicans into the Senate deal is that it would have enforcement benchmarks that would have to be met in theory before other provisions kick in.

The benchmarks include 370 miles of fencing on the border (half what was in the Secure Fence Act) and the hiring of thousands more border agents. If these things happen, however, it still might be that more illegals come here, pulled by the allure of amnesty. The only meaningful benchmarks would be reductions in the number of border crossings and the size of the illegal population already here.

The deal also provides for an electronic system to verify the legal status of employees at the workplace. This is important. But as a writer on the PowerLine blog points out, government is good at handing out benefits like amnesty, but bad at creating and competently running complex systems. Maybe when the FBI finally has up-to-date computers we can believe promises of a new workplace-enforcement system to accompany an amnesty.

And it is an amnesty, no matter what supporters call it. Sen. John McCain, a backer of the deal, unleashed this howler at the GOP presidential debate: "I have never supported amnesty and never would." But the 12 million illegals here before January would get probationary legal status immediately when the bill passes, an effective amnesty. (It's unclear why illegals arriving here after January would be excluded so coldheartedly -- what does McCain want to do, deport them all?)

Another 400,000 people a year would come into the country as guest workers on visas good for two years and renewable only three times. Will we have the will to hold them to that? In a nod to the fact that importing so many low-skill workers makes no sense, the deal would put a new emphasis on skills rather than family unification in admitting new legal immigrants. But before doing so, it would work through the current backlog of applicants, admitting another roughly 4 million people over the next eight years.

All of these provisions would never pass on their own without the cover of enforcement. Which raises the question, Why not just do the enforcement? Backers of amnesty reply that it's impossible to deport 12 million illegal immigrants. So it is. But that's not necessary.

Last year, 221,664 illegal immigrants were deported, an increase of roughly 20 percent from the year before. If we determined to keep that pace of increase during the next few years, the number of illegals deciding to come here and deciding to stay would decrease with the realization that the climate of tolerance for illegality had ended. Then, the magnitude of the problem would be more manageable, but that's not what the bipartisan political elite wants. Instead, it wants its rotten deal.