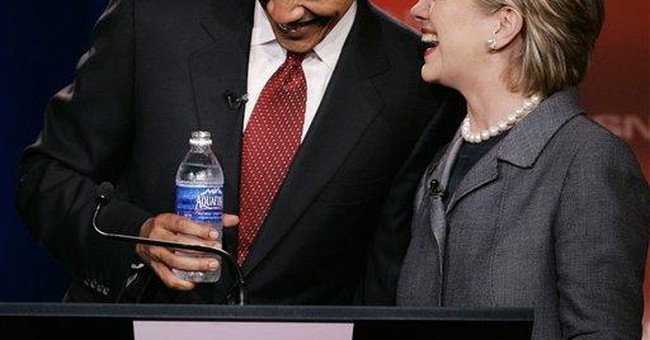 The front-runners in the Democratic presidential race have discovered the power of an idea whose time has passed: socialism in women's wages. Its power is in pandering to feminist voters, and its time passed because it never made any sense even when it was a bright, shiny new bad idea some 30 years ago.

It deserved its place on the junk heap, given that women have been improving their place in our economy without far-reaching governmental intervention. Nonetheless, Hillary Clinton has renewed her push for her Paycheck Fairness Act, and Sen. Barack Obama has endorsed the Fair Pay Act. Whenever the word "fair" features so prominently in Democratic legislation, the odds are that it is economically illiterate, and this legislation doesn't disappoint.

Discrimination against women is already illegal and employers have to give women equal pay for equal work. What Clinton and Obama want to establish is the more nebulous concept of "comparable worth," or equal pay for different work in female- and male-dominated professions. The Obama-endorsed bill mandates equal pay for "equivalent jobs," while Clinton's bill would establish voluntary "guidelines to enable employers to evaluate job categories" -- all in the cause of increasing wages in female-dominated jobs beyond that determined by the market.

This intervention is supposedly so urgent because women make only 77 percent of what men do. Feminists believe that this wage gap is caused by The Man -- and that's not just a metaphor: He's really a man -- who carefully sets women's wages to keep them below that of members of the patriarchy in good standing.

Never mind that the 77 percent figure is, in the words of Hudson Institute economist Diana Furchtgott-Roth, "flawed and bogus," failing to account for the most basic variables. The figure for men and women who work 40 hours a week is 88 percent. Baruch College economist June O'Neill finds -- adjusting for factors like schooling, lifetime work experience, and workplace characteristics -- that the gap almost disappears, with women making 95 percent of men's wages.

The wage gap closed rapidly in the 1980s. This wasn't because the Reagan administration was a vigilant regulator of the workplace, but because women began to benefit from what had become significant time spent in the work force and from increasing education and skills. In the early 1980s, for the first time women earned more B.A. and M.A. degrees than men. In 1970, only 5 percent of law and business degrees went to women; now they earn roughly 47 percent of law degrees and 35 percent of M.B.A. degrees.

Different pay for different professions persists, of course. Nurses aides (89 percent female) have more education than truck drivers (97 percent male), but their median earnings are just 57 percent that of truck drivers. This isn't discrimination, but a reflection that driving cross-country is unpleasant work. Women tend not to want to do it.

That kind of choice is a key factor in the male-female wage differential. Average earnings for male physicians are $170,000, for female physicians $100,000. Bias? No, as Furchtgott-Roth has noted, "many women choose to go into pediatrics, psychiatry and family practice, all lower-paying fields than surgery, which is more demanding in terms of hours." Many women choose professions that are compatible with having kids, and when they have children, tend to take a break from their careers (whereas men actually work more).

"The main source of productivity differences between women and men stems from the lesser amount of time and energy that many women can commit to labor market careers as a result of the division of labor within the family," O'Neill writes. "Women continue to work part time more than men and to choose work situations such as work in nonprofit institutions and occupations that more easily can be accommodated with home responsibilities."

Hillary Clinton and Barack Obama might wish this fact weren't so, but there's no way for them to legislate it out of existence, even with a very bad, dated idea.