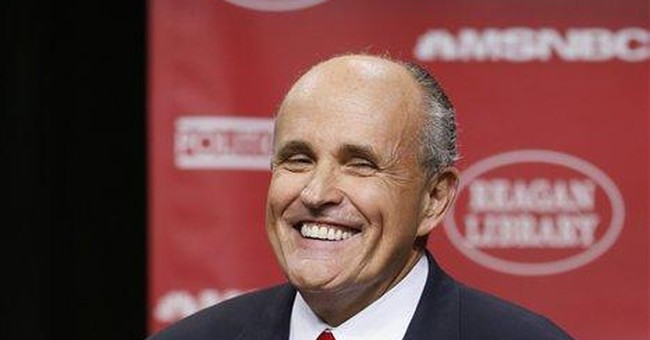 Rudy Giuliani is supposed to be the candidate of authenticity, the tough-talking former New York City mayor who sticks to his beliefs no matter what. But he is repeating a line that is so flagrantly insincere, it makes any of Hillary Clinton's canned talking points seem free and natural by comparison.

Giuliani claims he "hates abortion." Oddly, this hatred didn't manifest itself until Giuliani realized he had to have something to say to pro-lifers besides that he supported abortion on demand in any circumstance.

Giuliani has been pounded by pundits for his answers on abortion at the first GOP debate. But he didn't commit a gaffe. He only suffered from the contradictions of a position that appears to be the product of poorly thought-out political calculation.

The Giuliani camp figured he couldn't abandon his pro-choice position when running for president. His political appeal is based on his strength, so he can't be seen as wavering on so fundamental an issue. Besides, he already had changed his position once before -- when first running for New York City mayor in 1989 -- from pro-life to pro-choice.

A funny thing happened, however, to Giuliani's strength of conviction on the way to the Republican primaries. He has moved right on the Second Amendment, on civil unions for gays and on partial-birth abortion. It seems that he is willing to bend on everything, except that which is most important to social conservatives -- the right to abortion itself.

Instead, he has crafted an exquisite muddle. He reaches out to anti-abortion Republicans by saying that he would appoint "strict constructionist" judges, widely construed as code for judges who would oppose Roe v. Wade. At the same time, Giuliani casts doubt on his own constitutional judgment by refusing to say that Roe is wrongly decided. Even liberal legal eminences like Lawrence Tribe and Cass Sunstein say Roe is constitutionally dubious, but Giuliani, the strict constructionist, won't go there.

He likes to say that the constitutionality of Roe is up to judges to decide. This is a transparent dodge. It also plays into one of the profoundest defects of our political culture, which is overly deferential office-holders allowing judges to occupy an outsized place in our public life.

Giuliani should abhor Roe since it tramples the constitutional virtue that he has been trumpeting lately, federalism. He explains his new tune on gun control by saying it should be up to states to decide their gun laws. But Roe prevents states from passing any meaningful restrictions on abortion.

Giuliani apparently thinks that saying he hates abortion is enough. But pro-lifers will want to know why he hates abortion. Because it's taken the lives of 48 million unborn babies since Roe? Giuliani's "hate" line rings so false because temperamentally he is not one to hate something without outlawing or attempting to discourage it.

So far what Rudy has most effectively communicated is his distaste for people who actually hate abortion. He says pro-lifers want to throw women in jail, the canard that pro-choicers always throw at them, and he has implied that pro-lifers hurt the GOP.

Giuliani can upgrade his position by pronouncing Roe a constitutional monstrosity. Is opposing Roe and being pro-choice too confusing? Giuliani can give everyone a basic lesson in self-government -- you can hold a position without insisting that the Supreme Court mandate it. He should vow to veto any expanded funding of abortion. And in keeping with his (supposed) hatred of abortion, he should make it clear that he values the work of anti-abortion activists and understands why they would vote to prohibit abortion in a post-Roe world, even if he would vote the other way.

This would make Giuliani as acceptable as a pro-choicer is going to get to social conservatives. His position would still be a contrivance, but at least it would be a coherent and shrewd one. The alternative might be watching his campaign founder on an issue about which he cares very little.