Paranoia and the U.S. Attorney Controversy 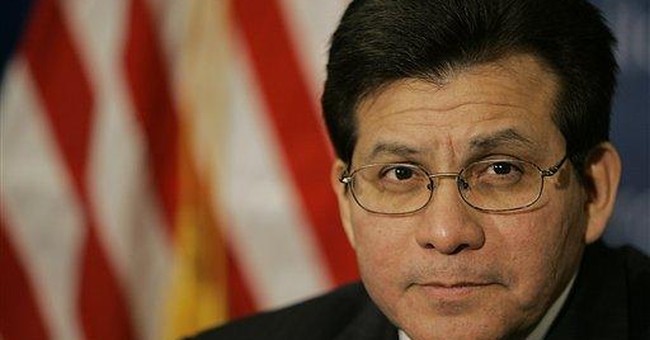 In "A Beautiful Mind," her bestselling biography of mathematician John Nash, Sylvia Nasar describes the process whereby he went mad. He spun coincidences and unrelated incidents into a pattern utterly detached from reality.

Nash's example suggests that if Attorney General Alberto Gonzales is at risk of losing his job in the flap over the firings of U.S. attorneys, New York Sen. Chuck Schumer might be at risk of losing his mind. He and his fellow Democrats leap from one hypothesis of wrongdoing to another, all in the service of their grand paranoid theory: that Karl Rove orchestrated the firings for nefarious reasons yet to be determined.

Former Secretary of Defense Don Rumsfeld liked to say that the absence of evidence isn't evidence of absence. Democrats have a simpler axiom in the U.S. attorneys case -- the absence of evidence is evidence. With every Justice Department document drop that shows no evidence of anything illegal or unethical, Democrats seem more convinced that there is a cover-up of some ill-defined wrongdoing.

A few weeks ago, Schumer was on TV -- when is he not? -- saying that the firing of Carol Lam, the U.S. attorney for the Southern District of California, was the "most notorious" of the eight firings. Lam had prosecuted corrupt Republican Rep. Randy "Duke" Cunningham, who now is in jail. Schumer said that it was known Lam was going to prosecute more Republicans, so the Justice Department shut her down.

Put aside for the moment that the firing of a U.S. attorney alone won't shut down a particular corruption prosecution, which will be carried on by career prosecutors. As National Review reporter Byron York relates, in all the thousands of e-mails released by the Justice Department, there is no mention of Cunningham in connection to Lam, and the concerns about her performance centered on lax immigration prosecutions, which pre-dated the Cunningham case.

So much for the "most notorious" firing. Schumer has shifted of late to saying that the shifting explanations of the firings by Gonzales imply that he is "hiding something." From what we know of Gonzales' incompetent operation at the Justice Department, however, we can be certain that if he were actually trying to hide something, he would have revealed it by now.

Gonzales' statements about the firings have been wrong and inconsistent, but that appears to have more to do with his sloppiness with facts and language than anything else. A month ago, if Gonzales had been called upon to summarize the Anna Nicole Smith case, he probably would have messed it up -- but that wouldn't have meant he was the father of her baby.

In a novel theory, Illinois Sen. Dick Durbin now says the scandal might be that there was an implicit, corrupt deal to keep the non-fired attorneys in place. So it wasn't the firings but the non-firings that are the potential outrage. Lately, Democrats also have focused on the missing Rove e-mails from his Republican National Committee account, figuring that if they are missing, they ipso facto are part of a cover-up of something or other.

The U.S. attorneys inherently are political positions. They serve at the pleasure of the president and often are recommended by senators. This obviously doesn't mean that they should be partisan in their administration of justice, but they must share the administration's law-enforcement agenda, and the reasons for their selection might have a lot to do with politics.

The most troubling firing is that of New Mexico U.S. Attorney David Iglesias, whom Republican Sen. Pete Domenici complained prior to the election wasn't pursuing a corruption case against Democrats quickly enough. If his termination was for explicitly partisan reasons, that would be inappropriate, but a senator complaining about a U.S. attorney is not in itself a scandal.

Whatever the wrongdoing is supposed to be at this particular moment in the U.S. attorney controversy, it no doubt will change. As he maneuvers to keep the story alive, let's just hope Chuck Schumer keeps his hold on reality.