Defeatist at the Border 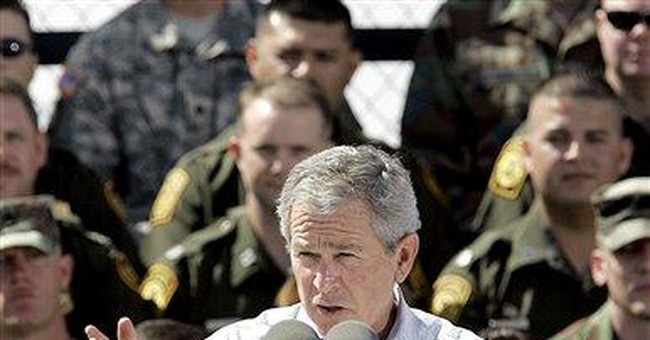 Not all incremental progress is equal in the eyes of President Bush. When it occurs in Iraq, it is a sign that we need to forge ahead despite all difficulties. When it occurs on our Southern border, it is deemed insufficient and a sign that -- to use a favorite GOP phrase -- we need to settle on a "surrender date" on immigration enforcement.

That date would be whenever Bush's latest "comprehensive" reform proposal kicked in. He wants to legalize illegal immigrants already here and invite in "temporary" guest workers. When Congress finishes with it, this probably will be another proposal to solve the illegal-immigrant problem by making all immigrants past and future legal. This is the immigration-enforcement version of "declare victory and go home."

And Bush wants to do it just as increased enforcement -- like "the surge" in Baghdad -- is showing tentative signs of progress. Apprehensions of illegals are down across the border, an indication that fewer of them are coming. Steven Camarota of the Center for Immigration Studies notes that the foreign-born population grew by only 500,000 last year, significantly off the annual pace of growth since 2000.

The administration contradicts itself on enforcement. On the one hand, it touts the success of increased border patrols and occasional workplace raids, because it realizes, politically, that it has to be seen as trying to enforce the laws. On the other hand, it argues that enforcement can't possibly work, so we have to adopt an amnesty and guest-worker program.

The rational response to the promising signs from enforcement would be to do more of it, and to avoid undercutting its early success. But on immigration, the Bushies are -- again, to use a term from the Iraq debate -- defeatists.

The cost of this defeatism is borne disproportionately by low-skilled, native-born workers and the taxpayers. Flooding the job market with poorly educated immigrants does no favors for low-skilled native workers. It can only serve to depress their wages in what is already a difficult economic environment for them. Camarota believes a recent uptick in low-skill wages could be related to the slowdown in the flow of foreign workers.

The burden on taxpayers, meanwhile, is a function of the nature of government benefits. Robert Rector of The Heritage Foundation calculates that low-skill households receive $32,138 in direct government benefits and services, $10,000 more than the average household. These low-skill households pay less than $10,000 a year in taxes, meaning they get three dollars from the government for every dollar paid. Because almost all immigrants from Mexico are low-skilled, they can only add to this fiscal drain.

At least Bush wants to attempt to depress the wages of higher-skilled workers, too. He is proposing to expand the number of H-1B work visas for higher-skilled foreign workers, who tend to get paid less than their native-born counterparts. Alan Greenspan recently conducted a thought experiment. "Our skilled wages," he said, "are higher than anywhere in the world. If we open a significant window for (foreign) skilled workers, that would suppress the skilled-wage level and end the concentration of income."

Indeed, it would. It also would cause a political revolt. Such a revolt doesn't occur at the lower end of the income scale because the natural representative of the interests of native low-skilled workers -- the Democratic Party -- has bought into high levels of immigration in the hopes of getting new voters.

Bush's failings at the border mirror his failings in Iraq. In both places, he underestimated the need for security and order and has undertaken a push for them only belatedly. In both places, he was motivated by a good-hearted belief in the essential fungibility of people. He thought that Iraqis naturally would have the same desires as Westerners; and on the border, he assumes that Mexicans are seamlessly interchangeable with Americans, since they seek employment here.

In Iraq, he has tried to compensate for his mistakes. On the border, he seems hopeless.