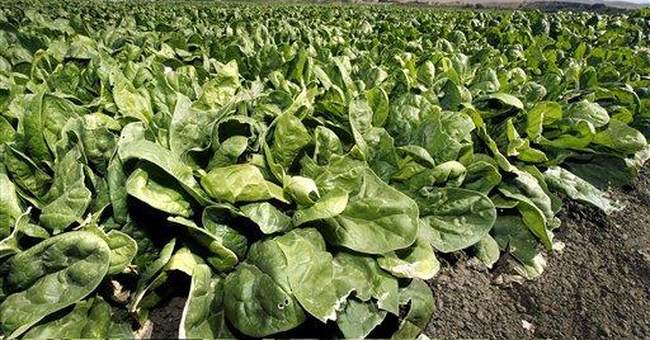 Spinach might not seem to have anything to do with military operations. But there it is, in an emergency supplemental bill to fund the wars in Iraq and Afghanistan: $25 million for California spinach growers, whose vigorous, martiallike spinach-growing had heretofore not been seen as part of the war effort.

The war bill illustrates the axiom that guides the nation's agricultural policy: namely, that any principles of good government, common sense and fiscal sanity must always be abandoned in the cause of shoveling federal dollars at American farmers. Its $4 billion for disaster relief, together with millions for peanut storage, sugar-beet production and the Milk Income Loss Contract Program, isn't unusual, except for the fact that it was used to buy votes for a pullout from Iraq. For House Speaker Nancy Pelosi, apparently, all geopolitics is local, and some of her members are happy to lose a war if they can win a subsidy.

Otherwise, the ag spending is unremarkable, part of the perpetual bi-partisan, farm-spending gross-out.

Disaster relief is always a rationale for giving money to farmers and ranchers, some of whom are so disaster-prone that they must be living on the set of the biblical-plague movie "The Reaping." A study of the past 21 years of emergency disaster aid by the Environmental Working Group found that most farmers and ranchers rarely receive the aid, but a small minority "are chronically dependent on disaster aid and over two decades have collected it one year out of every two or three, if not more frequently."

Roughly 21,000 recipients collected "disaster aid more than 11 years out of 21, amounting to $2.5 billion," or nearly 10 percent of the total disaster aid of $26 billion in that period. This highlights another rule of federal agricultural spending -- it tends to benefit very few farmers and ranchers.

Over the past decade, most farmers (66 percent) didn't receive subsidies, but among those who did, a select 10 percent received 73 percent of all payments, according to EWG. That means they raked in more than $120 billion from 1995 to 2005 and received an average of $34,000 a year. Some of them are very rich, and they effortlessly evade the notional annual-income cap on subsidies of $2.5 million.

Helping the rich is hard to avoid since farming is such a thriving sector of the American economy. As Brian Riedl of the Heritage Foundation points out, the past three years have been the best for farm income ever. The chief economist of the United States Department of Agriculture says "crop and livestock receipts are forecast to be record-high in 2007," and "the sector's debt-to-asset ratio should remain at a historic low level of 11.8 percent in 2007."

Of course, in the perverse logic of farm subsidies, as incomes have gone up, so have federal payments. In the 1990s, they averaged around $10 billion a year. Now, they are about $20 billion a year. The increased level of payments was supposed to obviate emergency disaster spending. But we see how that's working out.

With a debate concerning a new farm bill set for this year, the Bush administration is proposing ending subsidies for 80,000 rich farmers. It would reduce the income cap on subsidies from $2.5 million to $200,000, saving $1.5 billion over the next 10 years. It would close loopholes exposed in a recent Washington Post series, including one that enabled corn growers to game the government for an additional $3.8 billion in 2005 and one that makes it possible for nonfarmers to still receive subsidies.

The Bush proposal already is facing opposition on Capitol Hill. The president is about to get a lesson in congressional resolve. Facing down enemies overseas is too arduous for a Congress that wants us out of Iraq by next year. But if someone dare attempt to diminish farm payments? Well, then, Congress will fight on the beaches, in the fields and in the streets.