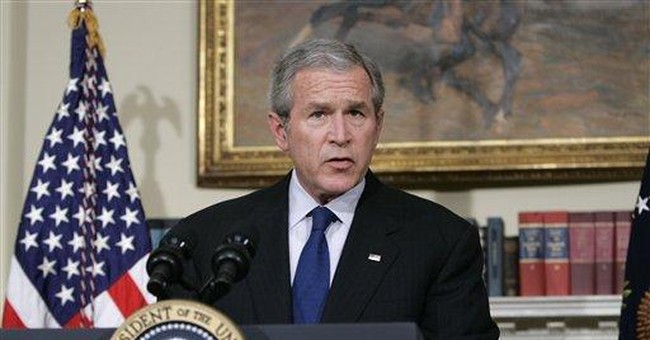 When President Bush announced a surge of troops into Baghdad in January, Democrats pounded him for the folly of putting U.S. troops in the "middle of a civil war." Two months later, the question is, What happens to a civil war if only one side shows up to fight it?

The Shia militias that had become the main driver of violence in Baghdad are ducking and covering. Militia leader Moqtada al-Sadr is in hiding, perhaps in Iran. His fighters aren't resisting U.S. troops who have begun conducting patrols in his stronghold of Sadr City. According to Gen. Dave Petraeus, 700 members of Sadr's Mahdi Army have been detained in recent months.

This hardly means that peace and harmony reign in Baghdad, but it has reduced the killing significantly. If at the beginning of the year anyone had predicted such progress from the addition of just two U.S. combat brigades in Bagdad (six brigades eventually will be part of the surge), he would have been derided as a delusional optimist.

This progress might be transitory, but it illustrates the falsity of a key assumption of Democrats. They prefer to talk of Iraq in terms of a civil war because it suggests that nothing can be done about the violence, that it is running its own hermetic course. Well, it clearly isn't. What the U.S. does matters. If we hadn't surged, Baghdad already might have descended into the genocidal fury toward which it was headed earlier in the year.

The other side of the Iraqi civil war — the car-bombing Sunni terrorists — hasn't stood down, of course. But these are the people that Democrats express a notional interest in fighting. In a January letter to President Bush, House Speaker Nancy Pelosi said "counterterror" should be one of the "principal" missions of U.S. troops. Sen. Carl Levin wants to restrict U.S. troops to "an anti-terrorist mission to go after al-Qaida in Iraq."

According to a U.S. intelligence report quoted by The New York Times, captured materials from al-Qaida in Iraq say that the group sees "the sectarian war for Baghdad as the necessary main focus of its operations." So the Democrats profess to want to fight terrorists in Iraq, and al-Qaida in Iraq is making Baghdad its focus. It would stand to reason, then, that the Democrats wouldn't want to undermine our effort to control Baghdad. Our counterinsurgency mission there is a counterterrorism mission. It aims to squeeze out terrorists, neighborhood by neighborhood.

Nonetheless, Democrats in the House and Senate are attempting to force our troops from Baghdad, exactly as al-Qaida in Iraq wants. There is an essential symmetry to the goals of Sunni militants and Democrats here at home with regard to the disposition of our forces — the fewer, the farther away from Baghdad, the better (needless to say, for vastly different reasons). In reporting on al-Qaida in Iraq's strategy, The New York Times notes, "American forces, instead of withdrawing from the capital as the Sunni insurgents had hoped, prepared plans to reinforce their troops there." Over the strenuous objections of Democrats.

Each side of the domestic debate concerning the Iraq War tends to get stuck in its own self-reinforcing narratives. For Bush and supporters of the war, it was a narrative of success. Negative developments were chalked up as the inevitable difficulties of any war, amplified by the liberal media. Bush broke out of that narrative to order the change of strategy that is the surge.

For Democrats, it is the narrative of defeat. Even as the civil war has de-escalated somewhat in Iraq —weakening the force of the Democrats' favorite "middle of a civil war" sound bite — and even as the surge has elevated the fight against al-Qaida in Iraq — the enemy that Democrats say they want to defeat — Democratic opposition to the surge has only intensified. Will they oppose it even more if it continues to work?