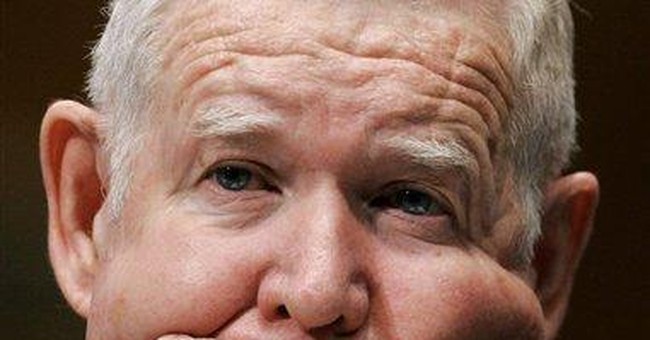 While other House Democrats were pretending that their nonbinding resolution against the Iraq troop surge was of great import, anti-war champion Rep. John Murtha spoke the truth. It is not "the real vote," he said in a webcast for the left-wing MoveCongress.org. That comes with Murtha's imminent attempt to hamstring President Bush's conduct of the war that may well spark a constitutional crisis.

There is a straightforward way for Congress to end a war: Cut off its entire funding. Congress has the power of the purse, the most important lever of legislative influence in the Anglo-American tradition. But House Democrats don't want to wield this power because they're afraid it will expose them to charges of de-funding the troops. So they are resorting to an unconstitutional expedient instead.

Murtha wants to attach conditions on the impending supplemental appropriations bill to fund the war. He would require that troops have a year at home before redeploying, that they train with their own equipment before deploying and so on. Because the too-small U.S. military is under enormous strain, these conditions would be impossible to meet while still doubling the number of U.S. combat troops in Baghdad.

Murtha repeatedly says in the webcast that his proposals are meant to "protect" the troops. But he is frank about the not-so-ulterior motive of keeping more troops from heading to Iraq, explaining that "they won't be able to do the work." Because his provisions can be sold as guaranteeing the readiness and quality-of-life of the troops, Murtha believes that they "will be very hard to find fault with."

Only if one ignores our constitutional scheme. The president, not Congress, is the commander in chief. Congress was never meant to, nor is it suited to, direct tactical military decisions, as Murtha seeks to do with his restrictions.

Arguably, his maneuver will be the most blatant congressional intrusion on the president's war-making powers in the nation's history. Congress choked off the Vietnam War in the 1970s, but only after U.S. ground troops were mostly already out of the country and chiefly as a matter of cutting off aid to South Vietnam.

Just as disturbing is Murtha's cynical reliance on failure in Iraq as a political strategy. The plan aptly has been described by the Web site Politico.com as a "slow-bleed" anti-war strategy. The surge is the best chance of turning the war around. By hampering it, Democrats will ensure that the war continues to fail, and thus that domestic political support for it plummets to the point where Democrats feel safe in de-funding it.

The subconscious logic of their position on the war has thus taken a subtle turn. It used to be that the war had to end because it was a failure; now it must fail so that it can end.

Democrats don't see this distinction, since they simply believe the war is irretrievably lost. But they still pay laughably unserious lip service to the notion of success. Murtha says there's no military solution in Iraq, that we can win in Iraq only through the political process — as if it has no effect on the political process whether Shia militias are murdering Sunnis unchecked or laying low to avoid the surge. In a howler, he maintains that if we leave, "al-Qaida's going to disappear." Maybe if we spread pixie dust and close our eyes?

President Bush will have no choice but to reject the Murtha restrictions should they reach his desk. But a veto is problematic. As Murtha points out, a veto means that Bush doesn't get the continued funding for the war. He might have to sign the bill, take the funding and ignore the restrictions as an unconstitutional trespass on his powers. In that event, a cry to impeach him will go up from the increasingly powerful anti-war left.

The result of the Democrats' clever gambit could be a constitutional implosion from which no one — certainly not the country — will emerge a winner.