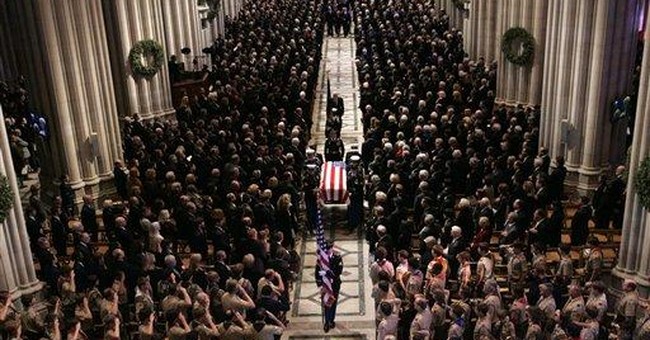 As the nation mourns the late President Gerald Ford, the muses of history must be smiling. They have proven again that their wisdom eclipses that of contemporary opinion-makers who lack the clarifying benefit of time.

With time, everything we thought we once knew about Gerry Ford has come untrue. He wasn't a corrupt tool of Richard Nixon pardoning away his predecessor's crimes in exchange for the presidency. He wasn't a failure. And he wasn't clumsy or stupid. All of these judgments were once part of the conventional wisdom about Ford, a conventional wisdom that dissolved as his presidency became more distant, and thus easier to see clearly.

Ford's pardon of Nixon demonstrates the long-term advantage of doing the right thing, and what is often its short-term cost. The pardon put Ford's public-approval rating in a downward spiral from the 70s to the 30s. That is the very definition of a political disaster, and Ford had to take the unprecedented step of testifying before Congress as a sitting president to try to beat back accusations of a corrupt deal.

The pardon certainly cost Ford the 1976 election, but it was certainly the right thing, saving the country from the Third World-like spectacle of a former president fighting criminal charges. In retrospect, the political mistake became one of the jewels of his legacy. Even Sen. Ted Kennedy, a scourge of the pardon at the time, admitted that it had been the correct decision when the Kennedy library bestowed on Ford a Profile in Courage Award, a sure sign that he had slipped into the good graces of the liberal establishment that once scorned him.

What the popular imagination latches on to at any given time might be an irrelevance. President Ford's economic policy has long been synonymous with the risible "Whip Inflation Now" lapel buttons that Ford promoted as a grass-roots blow against spiraling wages and prices. But, more importantly, Ford eventually pursued successful stimulative economic policies. Unemployment had hit 9 percent and inflation 12 percent during his term. By 1976, according to The Washington Post, "unemployment had dipped to about 7 percent, inflation had abated to 4.8 percent and the gross national product was humming along at a robust rate of growth."

Ford's foreign policy looks better in hindsight too. The Helsinki Accords with the Soviet Union, enshrining fundamental human rights, seemed a meaningless piece of parchment at best and a sellout at worst. Instead, they turned out to be a solvent that undercut the ideological moorings of Soviet communism. His pleadings for the U.S. not to cut adrift its allies in Southeast Asia were unpopular, but wiser than the insistence of the post-Watergate Democratic Congress -- in a fever to retreat from the world -- that we do exactly that.

During his presidency, Ford suffered from the nearly irresistible power of media image-makers, but time loosens their grip. All it took was a few pratfalls from comedian Chevy Chase portraying Ford on "Saturday Night Live," and one of our most athletic presidents was rendered a clod. Forget the sterling football career at the University of Michigan and the offers to play in the NFL. But the facts of those athletic accomplishments and his creditable academic record at Michigan and Yale Law School -- despite depictions of him as a dolt -- can't be erased forever.

This is why a president has to have longer vistas than the latest polls or what fills newspaper columns ever day. Seeming mistakes can be vindicated, widely held perceptions can reverse themselves and losing causes can come to seem noble. When President George W. Bush eulogized Ford, his voice seemed to have added force when he talked of how Ford's maligned-at-the-time presidency has taken on a different aspect today. That has to be a comfort for an embattled president struggling at the low ebb of his popularity.

Will Bush eventually enjoy a Ford-like revival? Only the muses of history know.