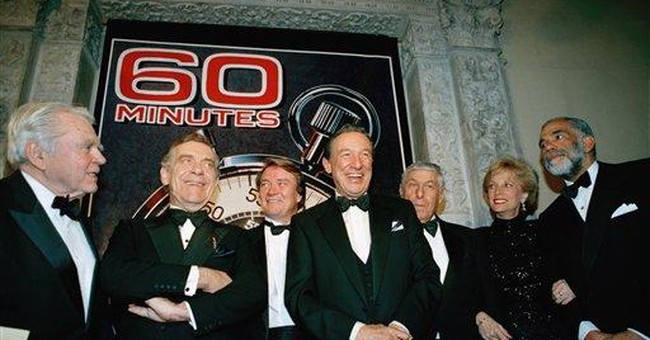 I didn't pay much attention to the Masters golf tournament this weekend.

On the religious front, the Mullings Director of Standards & Practices and I drove to Long Island Friday for the first night of Passover at my aunt and uncle's home; then, after a night in New York City, drove down to New Jersey for the second night at my younger brother's house.

We got home after midnight Saturday night and I slept in on Sunday.

On the sports front, I was more interested in seeing whether the Nationals could sweep the Cubs in the opening series of the 2012 season (they did not, but they came close, scoring three in the top of the ninth).

The only reason I got off the couch (dozing through a string of DIY programs) was to do a segment on CNN yesterday afternoon.

Sometime early in the day the word was released that CBS' Mike Wallace had died at the age of 93.

As a young reporter at WMOA radio, 1490 on your AM dial in Marietta, Ohio 45750 Mike Wallace was my hero. He, too, was a brat with a microphone.

If you thought you were better at answering questions than Mike Wallace was at asking them you would soon be presented with the error in your thinking.

I have often said that Mike Wallace's genius was evident in the brevity of his questions.

A young reporter - or any sports reporter - will spend upwards of 30 seconds asking a question that includes all kinds of set-up data.

Mike Wallace could freeze his subject with one word: "Why?"

When I found myself interviewing someone and droning on and on with my question, that "Why?" would come into my mind and I would often stop, back up, and rephrase my question in 10 or 15 closely focused words.

I wasn't Mike Wallace so I never could get the number of words in my question down to one.

Back to the Masters.

It wasn't until we got home after a quick bite that I turned on the Masters and realized I had the good fortune of catching the end of the Masters as a playoff between Bubba Watson of the University of Georgia and Louis Oosthuizen of South Africa.

Neither of them is named Tiger Woods (who ended the tournament at five over par, tied for 40th) but the two-hole play-off was very exciting to watch.

In the end Bubba beat Louis on the second hole of sudden-death and promptly broke into tears and hugged just about everyone from his caddy to the first-row gallery making him my new all-time favorite golfer because he is unschooled in the stoicism that professional golfers are trained to exhibit.

When Jim Nance asked Watson if he'd ever believed this day would come, Watson said, "I never got this far in my dreams."

I, like George W. Bush and John Boehner, am a crier. Friends know that I cry at coffee commercials at Christmas.

When Bubba Watson sunk his winning put and sobbed, I joined him (as I am now, remembering as I type this).

When I had to deliver the toast at the Lad and Ladette's wedding, I practiced it for two hours in the afternoon so I wouldn't break down in the middle.

I got through it, but it was a close fought thing.

Maybe we're all trained to be too tough; too steely-eyed.

On 60 Minutes last night (the CBS News magazine which Mike Wallace defined) there was a piece about classical music in the Congo.

Locals, who walk to rehearsals to rehearsal along muddy paths, and replace a broken violin string with a wire from a bicycle, presented a concert of Beethoven's "Ode to Joy" complete with a full chorus.

I sobbed through the ending (as I am doing now as I type this) for the joy that comes from people who are dedicated to doing something great; with great defined as successfully competing with themselves, not competing with the New York Philharmonic.

Something great might be spending Easter/Passover weekend with your family knowing that some of them not be with you next year.

A few tears never hurt anyone. They are often just one more expression of an Ode to Joy.