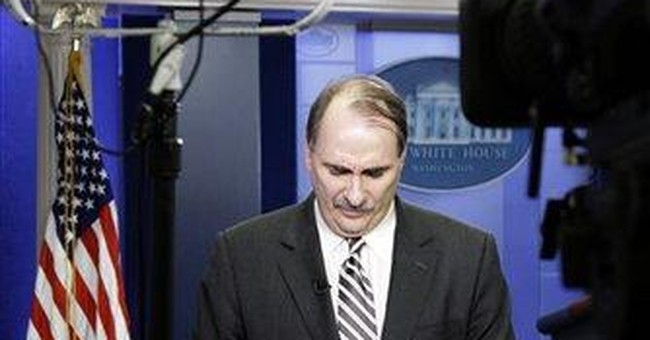 Last week was not a good one in the Obama Administration's drive to have one more crack at a health care bill in Congress.

First: Of the six national polls measuring President Obama's job approval taken over the past three weeks only one is over 50 percent. None of the others have him over 48 percent.

To successfully twist arms on the Hill, any White House needs political leverage which is measured by public approval (or, in the case of the Obama team, public adoration). With the President's approval ratings under water, using the real or implied threat of Presidential unhappiness is not likely to gain many votes among recalcitrant members of the Democratic House Caucus on the health care bill.

Second: White House Chief of Staff Rahm Emmanuel has rolled-out a full-scale "None-of-This-is-My-Fault" PR campaign which, in Washington, is always viewed as the precursor to a resignation ruefully submitted and regretfully accepted.

David Axelrod is the most Senior of Advisors at the Obama White House. In a NY Times piece yesterday, Emmanuel and Axelrod were compared this:

"Recent news reports have cast the White House chief of staff, Rahm Emanuel, as the administration's chief pragmatist, and Mr. Axelrod, by implication, as something of a swooning loyalist."

Can't send a "swooning loyalist" up to the Hill to twist those arms. No Independence Avenue cred.

A couple of months ago, President Obama called in his campaign manager, David Plouffe, to work out of the Democratic National Committee offices and oversee the 2010 House, Senate and Gubernatorial campaigns.

According to the Atlantic's Mark Ambinder:

Here's the key: Plouffe doesn't report to David Axelrod, or the deputy White House chief of staff; or to the DNC executive director; or to Gov. Tim Kaine, the DNC chairman; or to the White House political director.

He reports to the president. Informally. But this informal channel is Plouffe's and Plouffe's alone. Plouffe is the one who has the power to make the gears move more efficiently.

Here's how this works. Plouffe works out of the DNC but chats on a regular basis with the Democratic House, Senate, and Governor campaign committees. They NEED the President to do mega-events to raise money for those running for re-election in a tough year.

A nod or a shake-of-the-head from Plouffe and the Democratic Congressional Campaign Committee raises 10-15 million dollars at a DC fundraiser; or it doesn't.

Plouffe can - as Ambinder puts it - informally suggest that any House Dem who doesn't vote for the next version of the health care bill doesn't benefit from any funds raised via the President's appearance, image, voice, or signature.

No one would ever admit that had ever happened, but that's leverage in Your Nation's Capital.

Meanwhile, those very same House Democrats are lining up at the House Ethics Committee like s'mores at a summer camp color-war kick-off bonfire.

At the beginning of the week, Ways and Means Chairman Charles Rangel, Democrat of New York City, had to "temporarily" step down from his post following an Ethics Committee finding that he allowed private entities to pay for his travel, and a slew of pending ethics investigations into his fund-raising, tax-paying, and influence-peddling activities over the past years.

No one is betting Rangel will ever regain his post.

That was in the beginning of the week. At the end of the week a Democratic Congressman from upstate New York, Eric Massa, announced he would resign effective today rather than undergo an ethics investigation into charges he had sexually harassed a male staffer.

Finally, the Democratic Governor of that fine state, David Paterson, is mired in not one, but two ethical bogs; one involving his being accused, according to the Albany Times-Union of

"interference in a domestic violence case … while a new ethics controversy raises the question of whether Mr. Paterson improperly solicited tickets to the World Series."

A few more weeks like the last one, and the Democrats will run out of arms to twist.