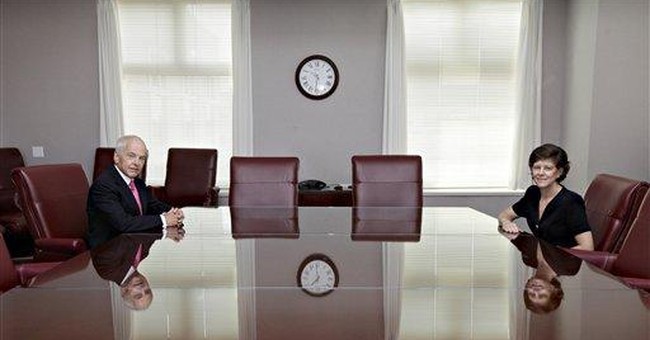 I can never remember what the Punxsutawney Phil rules are. Actually, until I typed this, I didn't know that Punxsutawney was spelled "Punxsutawney." I thought it was "Puxatawney." And so did you. Bless you, Bill Gates, for your spell-check.

I have received dozens - perhaps hundreds - of emails from among my 35,000 readers telling me to, in effect, "man up." This, because they live in places like North Dakota or Buffalo or Aspen, or where ever.

I don't care where you live. Twenty inches of snow is a serious snowfall. Ten to 16 inches of additional snow 72 hours later is … grounds to move to Pompano Beach, Florida. And buy a Cadillac. And drive 13 miles per hour. With your left blinker on. As you drive to Herb's Deli for the Early Bird at 4:30 in the afternoon. For the meat loaf.

If you know what I mean, and I think you do.

In other, non-weather-related developments, the U.S. Senate blocked the confirmation of President Obama's nominee to the National Labor Relations Board (NLRB), Craig Becker by a vote of 52-33.

If you are unfamiliar with the NRLB, the Wall Street Journal describes its mission as:

"the independent quasi-judicial federal agency that supervises union elections and referees disputes between employers and employees."

The Senate rules require 60 votes to proceed. Even though 52 votes out of the 85 cast are 61 percent, that doesn't make the grade.

Becker has been a lawyer for the SEIU - Service Employee International Union - which has been the single most aggressive labor union in the nation in terms of organizing and on issues like card check. Appointing Becker to the NLRB making rulings on organizing votes would be like appointing me to the … I can't think of anything I could or should be appointed to, so let's let that go.

Even as a mathematically challenged individual, I know that 15 Senators didn't vote on this nomination. I assume that at least some of those 15 missing Senators couldn't get back to Washington because of the heavily restricted flight operations at Dulles and Reagan airports due to the aforementioned snow.

That leaves some of us to ponder (dare I say mull?) as to why the Democratic leadership called up Becker's nomination yesterday instead of waiting until all the Senators were back (which, given this new snow storm a'brewin' might well be June).

Two Democratic Senators - Ben Nelson (D-Neb) and Blanche Lincoln (D-Ark) joined with the GOP to block Becker's nomination, but even if they had voted with the Ds he would have fallen six votes short.

It is because of the labor vote in Massachusetts a couple of weeks ago. If you remember, the AFL-CIO paid for a post-election poll which showed that labor households voted for Republican Scott Brown 49-46.

The Washington-based Democrats are tone deaf to the reasons for that vote and believe they can rally an iron-worker in Boston or a brick-layer in Missouri to return home to the Democrats by forcing a vote on Becker and drawing headlines like this from the Wall Street Journal:

Rank and file union members are not community-organizer-wannabees. They tend to be socially and culturally conservative and, given a choice between voting for a Republican who promises to protect their health care plan and a Democrat who is in favor of taxing them on that health care plan … guess what? They voted for the Republican.

If the old saw that "all politics is local" is true, then there is no more "local" than an individual's paycheck. So long as Obama and the Liberal wing of the Congressional Democrats insist on looking for new taxes to impose on more working people - union members or not - they will continue to fail at the ballot box.

Union members are no different than any other person working for a living: Threaten to tax the income they worked so hard to earn, and they will revolt no matter which political party is doing the taxing.

Most people can recognize a snow job when they see it.