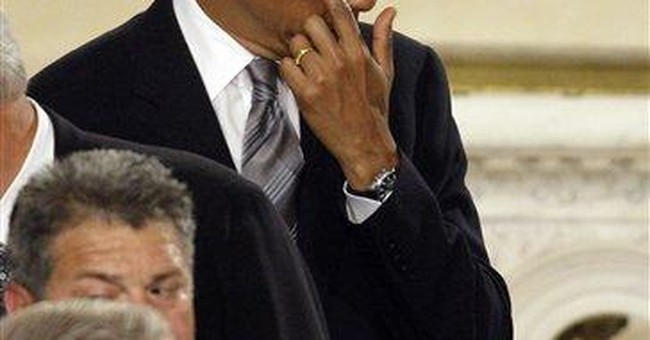 September first. Already. You know my theory on this: As you get older, time goes by faster because each year is a smaller percentage of your age. When you were five years old, a year was 20 percent of your life. If you get to be, say, 62 then a year is only 1.6 percent of your life.

Seems to go a lot quicker.

Even though Labor Day won't be here until next Monday and the Congress won't be here until Tuesday, Summer is over. The kids are largely back in school, we're down to about 13 hours of daylight on the East coast, and the high temperature today in Your Nation's Capital is forecast to be about 78 degrees.

So, how to best celebrate the end of Summer? Let's look at Barack Obama's poll numbers!

Using our "The-East-Germans-and-The-French-are-Cheating" theory of scoring Olympic figure skating and political polling we throw out the high number (ABC/WashPost) and the low number (Rasmussen) and end up with a pretty consistent number of 51 percent job approval for Obama.

According to Gallup, at the 100-day mark in this Administration, Obama's job approval stood at 67-28.

That isn't just a drop of 16 percentage points over the past four months; that is an outright collapse in the public's view of how well - or how badly - this Administration is doing.

The fact is, not much is going right for Obama right now. Unemployment appears to be stuck at about 9.4 percent (the next official Bureau of Labor Statistics number will be released on Friday).

Keep in mind the party which has ruled Japan for the past half-century was tossed out of office over the weekend in part because unemployment there reached 5.7 percent. The unemployment rate (in June) for the EU was about 8.9 percent.

Michael Hirsch (who is sort of a cousin of mine) writing in Newsweek pointed out that the Obama/Bernanke team has failed to solve the "too big to fail" problem which has cost all of us hundreds of billions in Wall Street bailouts.

According to Cousin Mike's reporting:

Recent reporting indicates commercial real estate loans are going south at an increasing rate putting more pressure both on the big banks and, of more concern, regional banks who were largely insulated from the derivative debacle of last year.

According to the Wall Street Journal, in addition to the $700 billion which is bound up in those pesky commercial mortgage backed securities which we've all helped pay for, "banks hold $1.7 trillion of commercial mortgages and construction loans, and delinquencies on this debt already have played a role in the increase in bank failures this year."

That's just the domestic side of Obama-World. On the foreign affairs agenda we have everything from Muammar Gaddafi celebrating the homecoming of the Lockerbie bomber and now wanting to pitch a tent in Englewood, New Jersey; to Afghanistan, Iran, and North Korea.

According to Boone Pickens we're still importing about two-thirds of the oil we use and too much of that comes from places like Saudi Arabia, Angola, Nigeria, and Venezuela meaning we are only the turn of a valve somewhere thousands of miles away from being plunged into a gas-shortage-created economic disaster.

So, Summer's over and as the Obama team returns to its desks in the White House they would do well to listen to that Chad & Jeremy tune, "Yesterday's Gone" on their official White House iPods: I loved you all the summer through
I thought I'd found my dream in you
For me you were the one
But that was yesterday and yesterday's gone