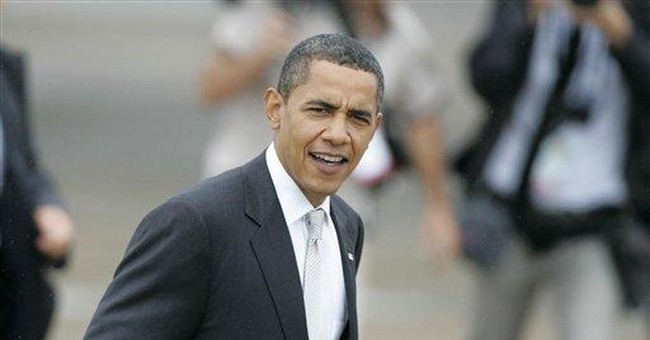 President Obama is not on a roll. In fact, he's in a slump. Let's review the past few days.

Five polls taken over the past week show that Obama's numbers are succumbing to gravity. A Fox Opinion Dynamics poll released yesterday had the President's approval rating at 54%.

Ok, you say, that's Fox. What about the REAL polls?

According to the Fox poll, among independents only "54% approve of the job Obama is doing, (down from 66% last month) and 36% disapprove" which is ten percentage points higher than a month ago.

Just to rub salt into this polling wound, according to Gallup, George W. Bush had an average approval rating of 56% at this same point in his Presidency.

What else? Oh, that business about the Harvard professor, Henry Louis Gates Jr., being arrested. Here's the Wall Street Journal's summary of what happened:

Last week, Mr. Gates found himself locked out of his home in Cambridge, Massachusetts. Instead of calling a locksmith, he and his chauffeur proceeded to break into the house.

When a neighbor noticed the two men forcing their way through the front door, she called the police. According to the police report, when the officers arrived Mr. Gates became belligerent, "exhibiting loud and tumultuous behavior," and was arrested for disorderly conduct.

scored the local police for "acting stupidly for arresting somebody when there was already proof that they were in their own home."

The President also went on to see in the incident echoes of "a long history in this country of African Americans and Latinos being stopped by law enforcement disproportionately."

Talk about acting stupidly. How about playing the race card and dissing a cop doing his job in the process? Obama isn't a community organizer anymore. He's President of the United States. And the cop in question is widely known as a decent guy who teaches the courses to rookies about the dangers of racial profiling.

By the way, Gates wasn't arrested for breaking into his own house, he was arrested for "exhibiting loud and tumultuous behavior."

Here's a good lesson whether you're Black, White, Green, or Blue: Don't get into a loud argument with a person who is in possession of a badge and/or a gun.

Don't believe me? The next time you are trying to get through the security check point at an airport, try getting into a shouting match with one of those TSA geniuses and see how quickly they smile, nod, and happily escort you to your plane.

He introduced his nominee for Surgeon General, Dr. Regina Benjamin. According to the Washington Post she is "a smart, accomplished person, a caring and skilled physician and a real go-getter."

Unfortunately, she is also about 40 pounds overweight. One of the most significant health problems facing the United States is obesity which is defined by the American Heart Association as being "30 pounds of more over ideal body weight."

I am willing to accept the notion that the Surgeon General can be the poster-woman for a national effort to lose weight. That would be swell. But, if we accept that theory, then Obama should appoint:

- a junkie as Drug Czar,

- a person whose license has been suspended as Secretary of Transportation,

- a deserter as Secretary of Defense,

- a slum lord heading HUD and,

- Bernie Madoff as chairman of the Securities and Exchange Commission.

I was going to add "tax cheats in the U.S. Treasury" but Obama has already done that.

FINALLY, yesterday Senate Majority Leader Harry Reid (D-Nev) announced he would not be bringing Obama's health reform bill to the Senate floor before the August recess, meaning it will not be voted on in the Senate until at least September.

So, while Obama was schvitzing in a high school gym in Ohio on his Sell the Health Care Tour, Harry Reid was being honest about what he could and couldn't get done.

All in all not one of Obama's better weeks in the White House.