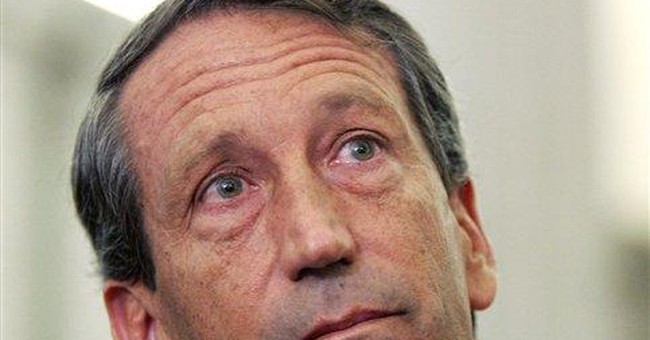 I was never a big fan of Michael Jackson. I don't mean personally. Personally, I think he should have been institutionalized. I mean I was never a huge fan of his music. The last live concert I went to was a reunion of the Limeliters and the Kingston Trio which, I believe, was "Presented by Depends".

Which is another reason why I never get invited out much.

As for Farrah Fawcett, I never watched "Charlie's Angels" but any normally aspirated male couldn't help but take a second peek at that poster of her in that red one-piece swimsuit. She was an oddity in Hollywood: A pin-up girl, who worked on her art to become a real actor.

If he hasn't already done it by the time you read this, South Carolina Governor Mark Sanford should resign. If not for infidelity, then for abject stupidity.

Here's a good rule: If you are elected Governor of a State within the United States of America, and you are married, you should take a personal vow of faithfulness during your term of office.

If you don't believe me, ask Elliot Spitzer.

I know MULLINGS readers think that Republicans are treated more harshly than Democrats when they get caught with women who are not related to them by marriage. But, Elliot Spitzer - a Democrat - lasted as Governor of New York for about 48 hours after he got caught with a hooker at the Mayflower Hotel in Your Nation's Capital.

South Carolina Govenor Mark Sanford disappeared last week. His staff said he was hiking the Appalachian Trail to clear his head after a grueling legislative session.

Turns out he was clearing his head in Buenos Aires, Argentina with his honey of a number of years. Sanford's wife had already thrown him out of the house because she knew about the affair, and somehow or another Sanford's e-mails with the woman, who has been ID'd as Maria Belen Chapur, are now in the public domain.

Apparently "The State" newspaper in South Carolina has had these e-mails for about six months but the editors decided they couldn't decide whether they were legit or not until Sanford took his viaje secreto to Argentina.

The question you might be asking is: How do these morons think they are going to get away with this kind of behavior?

The answer is: We only know about the ones who get caught. We have no idea how many hundreds of Members of the House and Senate - of both genders - have strayed, as we like to say, outside the bounds of matrimony.

But, if you are an elected official and you do get caught you have to pay a penalty. Spitzer resigned. Sanford should. U.S. Sen. John Ensign of Nevada lost his leadership position in the Senate Republican Conference after he admitted, earlier this week, to boinking a staffer.

If anything good comes out of the Mark Sanford business maybe it will be this: It is well past time that the Republican Party needs to hold itself out as the nation's scold.

While it is perfectly within the realm of politics in American to do the "shame-shame" sign when someone in public office of either party gets caught playing out their fantasies, it is not the job of a political party to act like elders in a Puritan church wielding a birch rod when they catch anyone misbehaving - like nodding off during the sermon.

Missourian Scott Charton, sent me a Facebook message last night which said: Sanford's staff misunderstood the Governor. They thought he said he was hiking the Appalachian Trail. He had said he was tracking some Argentinean tail.