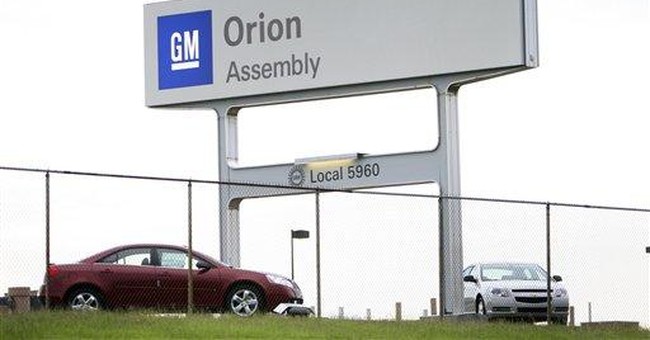 By the time you read this on Monday morning, General Motors will have declared bankruptcy. Within the next few weeks, according to published reports, it will have spun off or closed its Hummer, Saturn, Saab, and Pontiac divisions leaving GM with only its Chevrolet, Cadillac, GMC, and Buick lines.

General Motors has been in business since 1908. It became a "blue-chip" stock on March 16, 1915 when it joined the list of the, then, 12 companies which made up the Dow Jones Industrial Average.

On April 28, 2000 a share of GM would have cost you $93.63. Last night you could have bought about 125 shares for that same money as GM was trading at 75 cents. I suspect that had more to do with people wanting GM stock certificates as an historical oddity rather than as an investment.

As he did when Chrysler went differential up, President Obama is scheduled to make an official announcement about the GM bankruptcy from the White House at about noon. He may or may not get into all of the details, but Obama will own over 72.5 percent of whatever the "new" GM looks like with a trust fund of the United Auto Workers owning the second biggest chunk at 17.5 percent.

For those of you who, like me, are deficient when it comes to carrying-the-ones I did the arithmetic: The Obama Administration and the UAW will own 90 percent of General Motors.

Here's a good idea. Let's give the Feds and the UAW five or six years at the helm of GM and Chrysler to see how they do. If they do well, then the Federal government and Obama's other favorite union, the Service Employees International Union (SEIU), can take over the nation's health care business.

If Obama and the UAW screw it up, then perhaps we should look for another direction for America's health care industry.

As regular readers of MULLINGS know, I drive a 1999 Land Rover Discovery. I bought it just after Land Rover went from being a British car to a German vehicle when BMW bought it. Then Ford bought it from BMW so I was an American car. Now it is owned by Tata Motors, so I am the proud owner of an Indian vehicle.

I am never more than one more expensive repair bill away from needing a new car. When that time comes, I don't think I will buy a GM or Chrysler product. It's that whole thing about rewarding bad behavior.

I am interested in knowing what you think about buying a Chrysler or a GM in the near future. Is buying a Ford - which did not get itself involved in the government loan business - a good idea or a bad idea given the fact Ford will have to service its debt and deal with its unions without the benefit of the government owning it.

Is buying a Kia or a Hundai - Korean cars - a better or worse idea than propping up Chrysler and GM?

How about those pesky Japanese brands: Honda, Toyota, Mitsubishi, Nissan and all the rest? If they hadn't focused on quality and economy like they did, we would still be driving big America cars with lots of chrome and huge fins.

And the Germans. What more need be said about Mercedes and BMW? Will you buy one of those brands, thereby helping to toss GM and Chrysler under the imported bus?

The government can't force us to buy GMs or Chryslers, but they can provide incentives for us to do it. The Congress can pass legislation giving an additional tax exemption or deduction for the purchase of any car made by a company which is more then 50 percent owned by the federal - the American federal - government.

Conversely the Congress might pass a law putting an excise tax on the purchase of any vehicle not manufactured by a company which is more than 50 percent owned by the U.S. government.

The scary part about how far across the collectivism causeway we have come in so short a period of time is this: A few months ago you would have snorted at the silliness of a suggestion like that. This morning you're saying, "Oh, my, he's right. They might just do it."

The auto industry and health care are tied together. The thought of the government running them makes me car sick.