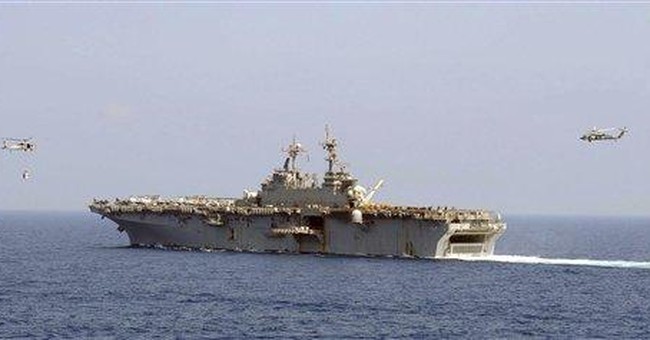 In piracy, as in most other endeavors, there are a few "first principles" which must be followed.

If you want to be a successful pirate in the Gulf of Aden, then the Principal Principle is: Take all the hostages you want just make sure none of them are Americans.

You can take 16 Italians hostages (as pirates actually did on Saturday while the AMERICAN hostage situation was being played out) and no one cares.

According to the Associated Press, as of Thursday of last week some 260 hostages were being held aboard 14 ships which had been hijacked in the Gulf of Aden. One of those, a Norwegian tanker, was released over the weekend having been held by pirates since the end of March with 27 hostages on board.

Didn't hear much about them, did you.

But, you take ONE American hostage and the next thing you know you've got Greta Van Susteren elbowing Anderson Cooper for space on the beach to do live reports every 57 seconds. And, Vice President Joe Biden is sending out for a Winston-Churchill-First-Lord-of-the-Admiralty outfit so he can pretend he is relevant.

The second rule is, if you violate Rule #1 and take Americans hostage, don't take them off the boat you have hijacked in the first place.

If you adhere to Rule #2, you can hide the entire crew locked up inside a big ship. For all of its excellent equipment, unless Superman happens to be cruising the western Indian Ocean and decides to help out, the U.S. Navy can't see through the hull or superstructure to see who is being held where and by how many so they don't know where to shoot or when.

Second, a big ship has bathrooms right on board so that whole business of, you know, needing to let your hostage go overboard (if you know what I mean and I think you do) is moot.

Third, if you keep everyone on the ship then it is piracy and you are holding the ship for ransom. Deciding whether or not to pay to get a ship out of hock is a business matter.

But, if you take one or more people off the ship then it is kidnapping and you are holding an actual person for ransom which is now a matter of morality. Even a Somali pirate can see how that will play differently on CNN or Fox.

According to the Wall Street Journal about 50 ships a day - A DAY - sail through the Gulf of Aden which is about the size of Texas. If we can't find illegal aliens crossing the border when we know were the border is, it is not likely we can patrol the whole Gulf of Aden efficiently.

According to the Wall Street Journal, about 66 ships have been attacked (and those 14 hijacked) since the beginning of the year. Let's act like shipping magnates and do the math.

Sunday was the 102nd day of the year. We'll use Friday so the arithmetic is easier. 100 days times 50 ships a day = 5,000 ships having sailed through the Gulf of Aden.

Sixty-six ships attacked out of 5,000 total passages means 1.32% of ships have been subject to having been hijacked.

Here's a comparison: There are about 250 million cars and light trucks on American roads. In 2007 there were 10.6 million accidents meaning about 4.22% of all passenger vehicles in America were involved in a wreck.

Your chances of being involved in an auto accident right here in the good old U. S. of A. is about three times the chances of a ship getting attacked by pirates in the Gulf of Aden.

I suspect that it has been an easy decision to pay the pirates ransom for the relatively rare ship which is actually hijacked rather than to hire armed guards to be aboard every ship going through the region.

There was a report that the pirates wanted $2 million for the captain. How much do you think it cost to have the U.S. Navy keeping tabs on that life boat for the past four days?

Ok, we couldn't - and wouldn't - have paid to ransom the captain, but that's why we're having this class: If you're going to engage in piracy, make it about the ship and not the people on board.

And take that stupid stuffed parrot off your shoulder.