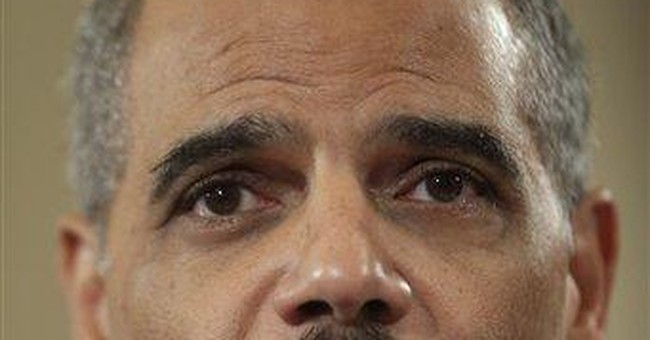 Attorney General Eric Holder, who is Black, gave a speech to the staff at the Justice Department the other day marking Black History Month. As part of his remarks he said:

Holder may have been absent the day that we elected a Black President. I hope that the next time President Obama holds a press conference one reporter in the room asks him if he supports his Attorney General's opinion that America is "a nation of cowards."

Holder went on to say,

"If we are to make progress in this area, we must feel comfortable enough with one another and tolerant enough of each other to have frank conversations about the racial matters that continue to divide us."

Holder's point was that while we seem to get along just fine in the workplace, Americans "self-segregate" on our private time. He said:

"Saturdays and Sundays, America in the year 2009 does not in some ways differ significantly from the country that existed almost 50 years ago. This is truly sad."

What is "truly sad" is that in the first month of the Administration of Barack Obama Holder couldn't give a speech celebrating the progress we have made.

He could have given a speech celebrating the fact that, notwithstanding his equating 2009 with 1959, on any weekend Mr. Holder can eat in any restaurant, sleep in any hotel, sit in any seat on any bus, drink from any water fountain and … dare we say it … have any job he is qualified for.

Actually, Holder has a job he is patently not qualified for: public speaker.

I'm comfortable enough. I don't walk around talking about race because I don't care about race.

I thought that was the goal we were supposed to have been aiming for.

Let us now turn to the case of United States Senator Roland Burris, Democrat of Illinois. According to the NY Times:

Mr. Burris is under investigation by the Senate Ethics Committee, as well as an Illinois prosecutor, over his evolving descriptions of what transpired before he was asked to fill the Senate seat vacated by Barack Obama.

Evolving. I love that.

The other Senator from Illinois, Dick Durbin (also a Democrat), said "the accuracy and completeness of his testimony and affidavits have been called into serious question."

Burris was appointed by the former Democratic Governor of Illinois Rod Blagojevich to fill the seat left vacant by the election of Barack Obama to be President. Blagojevich was wiretapped demanding money, or favors, or both in return for making the appointment.

He appointed Burris who was not immediately sworn in because the Illinois Secretary of State refused to certify Blagojevich's appointment. In the end Burris was admitted to the Senate because, it was held, he should not be punished because the guy who appointed him was a crook.

During impeachment proceedings against Blagojevich in the Illinois House, Burris testified he had no contact with Blagojevich nor with any of Blago's associates prior to his being appointed.

Last weekend, according to the AP:

Then a couple of days ago, Burris "changed his story again when he admitted trying, unsuccessfully, to raise money for Blagojevich."

Now, that's an evolving position if ever I read one.

Here's where these two stories come together: Mr. Holder is the Attorney General of the United States. If Mr. Burris - who is also Black - has, in the measured words of Durbin, submitted affidavits and given testimony which may have been inaccurate and/or incomplete, isn't this something the Justice Department might want to take a look at?

The Justice Department's Criminal Division has a unit - the Public Integrity Section - which is specifically responsible for investigating this kind of behavior.

The question is: Is Eric Holder comfortable enough about race relations in America to open a case against the only Black member of the United States Senate?

It just goes to prove: Bad behavior is color blind.