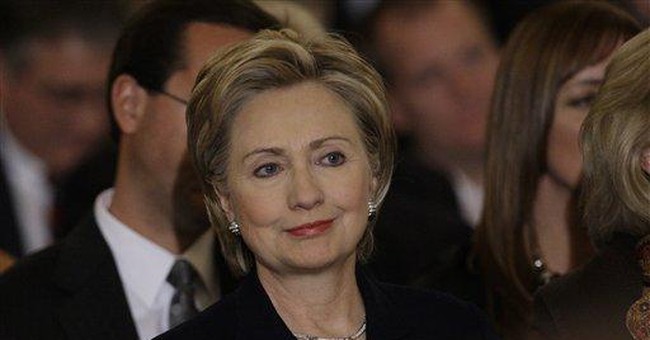 Let's get this off the table right now: Senator Hillary Clinton will be confirmed as the 68th Secretary of State for the United States since Thomas Jefferson was appointed on March 22, 1790.

The issue is Article I, Section 6; clause 2 which states:

"No Senator or Representative shall, during the time for which he was elected, be appointed to any civil office under the authority of the United States, which shall have been created, or the emoluments whereof shall have been increased during such time: and no person holding any office under the United States, shall be a member of either House during his continuance in office."

This is known as the "Emoluments Clause" and has nothing to do with emulsifiers which, until I was 47, I thought it did.

Hillary Clinton was first elected to the US Senate in 2000, was re-elected in 2006 and was sworn in for her second term in January 2007 which clearly falls within the "during the time for which (s)he was elected" part of the Emoluments Clause.

So, how can she be confirmed as Secretary of State if she was in office when the pay for that office was increased?

The way around this problem is called "The Saxbe Fix" because in 1973 Richard Nixon wanted to appoint Ohio Senator Bill Saxbe to be Attorney General to replace Elliot Richardson during the Watergate unpleasantness.

While Saxbe was a sitting Senator the pay of Cabinet officers had been increased from $35,000 to $60,000 and that pesky Emoluments Clause was in the way.

Before you start dancing around the coffee room about how it's all Nixon's fault, the first time this came up was when President Taft picked a Senator from Pennsylvania to be Secretary of State in 1909.

According to the Wikipedia entry on this subject the Senate Judiciary Committee determined (in 1909) that rolling back the pay to the previous level fixed the problem because it is the "net increases [which] are the relevant consideration."

Here's a better question. What if President Obama wanted a Representative or Senator who had been in office in March 2003, to be the Secretary of Homeland Security?

Hence the two DHS Secretaries have been Tom Ridge (former Governor of Pennsylvania) and Michael Chertoff (former Federal Judge). The next Secretary will be Gov. Janet Napolitano.

NBC News announced yesterday that David Gregory will be the ninth permanent host of Meet the Press. Gregory has been the chief White House correspondent for NBC having done at least two stints at MSNBC and subbed on the Nightly News and the Today Show.

I am a David Gregory fan. I know he'll be a terrific guardian of the franchise.