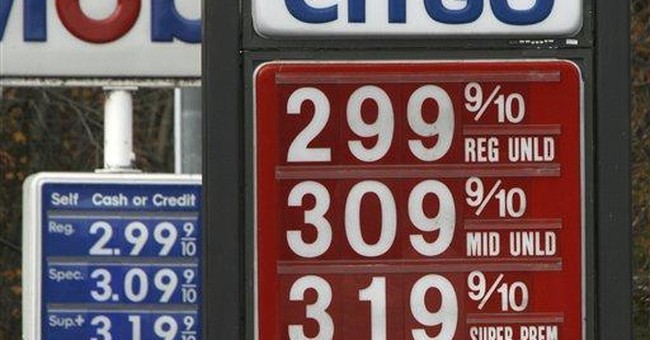 According to Reuters, "Gasoline is now about … about $1.33 less than it was at a record peak in July."

Wait. I thought gasoline prices (and the underlying price of a barrel of oil) was the precursor of housing prices collapsing. People had to choose between filling the tank of their Humvee or paying their mortgage and, as the old saying goes, "You can sleep in your car, but you can't drive your house" a fill-up at the neighborhood Exxon won out.

Next thing you know Lehman Brothers is sleeping with the fishes and AIG is cutting back on its "retreats" from 6 to 5 star resorts.

As long-time readers know, my main source of transportation is a 1999 Land Rover Discovery which gets about 15 miles per gallon. It has a 25 gallon tank.

Assuming I waited until the "STOP AT THE NEXT GAS STATION,YOU IDIOT" light came on (which long experience tells me happens when there are about four gallons left) on July 14, 2008 (when premium fuel averaged $4.28 a gallon) it cost just 12 cents shy of $90 to fill the Mullmobile.

As of last week, the average price of a gallon of premium was $3.11 meaning it now costs just north of $65 to fill the aging beast, a savings of $25 per tankful.

Very few of us actually purchase a barrel of oil. The only reason we ever cared about how much oil cost was because we knew it would have a direct impact on how much it cost to fill our tanks.

As I type this on Sunday night, CNBC is reporting that a barrel of oil on the NYNEX is selling for $64.07. This is down from its high of $147 a barrel in July.

Get me Boone Pickens on the phone.

The Wall Street Journal is reporting that U.S. refineries are cutting back on gasoline production in the light of falling prices. According to the WSJ: Gasoline output, which had been expanding as U.S. refineries came back online after hurricane-related shutdowns, dropped for the first time in weeks, according to data reported last week from the Department of Energy. Philadelphia refiner Sunoco Inc. said last week that it is shutting down a unit used in gasoline production at one of its refineries, though it declined to say why.

Maybe Barack Obama will nationalize the oil industry and put a stop to this - literally - highway robbery. That is, if Hank Paulson and Ben Bernanke don't do it first.

Finally some good news. According to the New York Times: President Mahmoud Ahmadinejad of Iran is suffering from exhaustion because of the strain of his job, the official news agency IRNA reported Sunday in an unusual disclosure about the health of the country's top elected leader.

More good news from Iran is that inflation is running at about 30% and the aforementioned collapsing oil prices "could force severe budget cutbacks and rising unemployment."

The bad news is, "The news agency quoted a political ally as saying Mr. Ahmadinejad would make a full recovery."

Well, in these difficult times we'll take our good news in small bites.