I Don't Want to Own This Junk 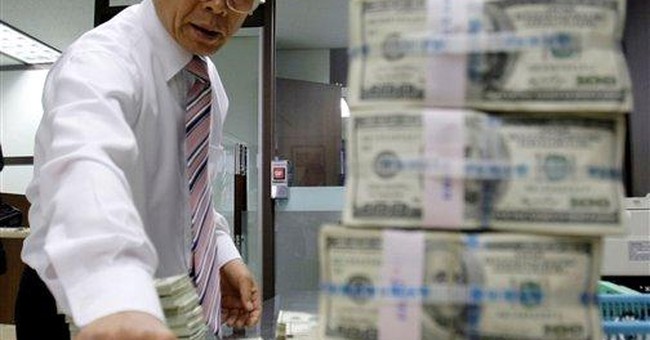 Welcome to the People's Republic of the United States of America where the government owns everything.

AIG is the the biggest insurance outfit this side of Saturn and were just one more huge organization which your federal government determined was "too big to fail."

Two things have happened since you and I did that.

First, AIG hosted a party. A par-TEE in California which, the LA Times described, thus:

The second thing is this: According to USA Today yesterday, "Less than a month after receiving an emergency $85 billion federal loan, crippled insurance titan American International Group may borrow up to $37.8 billion more from the Federal Reserve."

So, we lent them $85 billion, then they had a party in California and now they need another $38 billion (give or take) and … ?

How about this? How about let AIG go under? How about we let them and anyone they've done business with put their stuff in a cardboard box and stand on the street to hail a taxi home.

Here's the Washington Post's take on this excellent new obligation you and I are about to take on :

The Bush administration is hammering out the final details of a plan that would allow the government to inject cash into banks in exchange for ownership stakes in an effort to shore up confidence in the faltering financial system, according to officials and sources who have been in contact with the Treasury Department.

I do not want to own Bob's Bank. Or any other bank. Especially if the geniuses who have been running the bank have run the bank into the ground.

What am I missing here?

If you read the WashPost's report on what the Administration is now proposing, you and I are going to be on the hook for the banks' bad loans. But, because our money is not THEIR money, the Post reports "What is less clear is what strings would be attached, particularly regarding the compensation of top executives at participating banks."

Here's my plan for compensation of top execs at participating banks: Nothing. Nada. Zero. Bubkis. Not a farthing.

We'll get someone else. How about the guy who slices the bagels at the breakfast place on Pennsylvania Avenue? He cannot possibly do any worse than the slug with an MBA from Harvard.

I want the people who got us into this mess drawn and quartered. I do not want them to go to the Spa at some five star hotel in California on my dime.