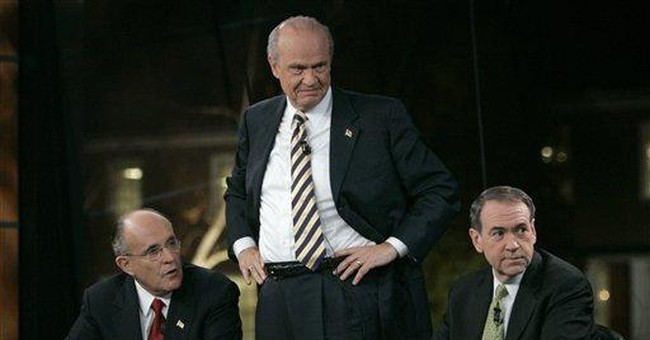 Tuesday is, as Governor George H.W. Bush famously called it eight years ago, "votin' day here in New Hampshire. Let's take a look at the combinations and permutations of the possible outcomes.

Governor Mike Huckabee who came out of nowhere to win the Iowa Caucuses is bumping along in distant third place here behind Senator John McCain and Governor Mitt Romney (or vice versa).

Huckabee needs to have a decent showing here or he risks being described as a one-hit wonder and will go into South Carolina on January 19 with his halo somewhat tarnished.

Romney has got to win here or his high-cost, talent-heavy campaign will be oh-for-two will be studied for the reasons for its two failures. He will go into South Carolina not marching proudly with a string of wins in his quiver, but desperately needing a win in a state where he may not be particularly popular with the extremely conservative Republican base.

McCain is, to use the argot of the day, "all in" in New Hampshire. McCain came in a close fourth in Iowa but has put all of his chip on the table here. It is unclear whether a second-place finish to Romney will permit McCain to move forward into South Carolina with any semblance of a campaign because he will not have the money to be competitive.

Mayor Rudy Giuliani did not compete in Iowa and is only marginally competing here (although I saw a television ad for his campaign yesterday morning). The Giuliani strategy is to hang on until the big states start to come onto the radar screen starting with Florida on January 29 and Über-Tuesday on February 5.

The issue for Giuliani is, he has been essentially out of the conversation (except for his headache) for the past two weeks as the press attention has been focused on Iowa and New Hampshire. Whether he can sustain interest by staying on the sidelines for yet another 25 days is problematic.

… and is not competing here - much as Giuliani did not compete in Iowa. Thompson is putting it all on a victory - or a very close second - in South Carolina. He left New Hampshire immediately after the debate on the Fox News Channel last night and will spend New Hampshire votin' day in the Palmetto state.

A weak second or worse and the Thompson campaign will probably be over.

Rep. Ron Paul (R-Tx) has spent lavishly in New Hampshire. He came in fifth in Iowa which did not produce the kind of surprise many (including me) suspected he might have, we should not discount him out of hand in a state where Independents, who can vote in either the Republican or the Democratic primary, may be attracted to his anti-tax, anti-war, Libertarian message which many traditional Republicans find a bit peculiar.

The political geniuses running the campaign of Senator Hillary Clinton thought that Senator Barack Obama was a flash in the pan last January. Then they thought he would be unable to compete against Clinton on the money front in the first quarter. Then they were certain she would out raise Obama in the second quarter, then the third.

They believed she would be the natural heir to the Liberal mantle of Democrats in Iowa last week. She came in third behind Senator John Edwards.

The Clinton campaign geniuses have underestimated Barack Obama for a year and Clinton has paid the price.

If Hillary Clinton loses to Obama here on Tuesday it will go a long way to making the Clinton campaign's worst nightmare come true: She is unelectable.

Even if Clinton were to beat Obama here, her troubles are far from over because about half voters in the South Carolina Democratic primary (which is on January 26) are Black and Obama will have demonstrated (A) he belongs in the uppermost tier in of candidates in the Democratic Party and therefore (B) a vote for Obama is anything but a wasted vote.

John Edwards came in second in Iowa but did not get the kind of "bump" his campaign was expecting, thus he is struggling for money and for attention which is a deadly combination at this point in the Presidential campaign cycle.

As I said to a reporter at the debate on Saturday night: I have to write MULLINGS three days a week. Chaos is my friend.