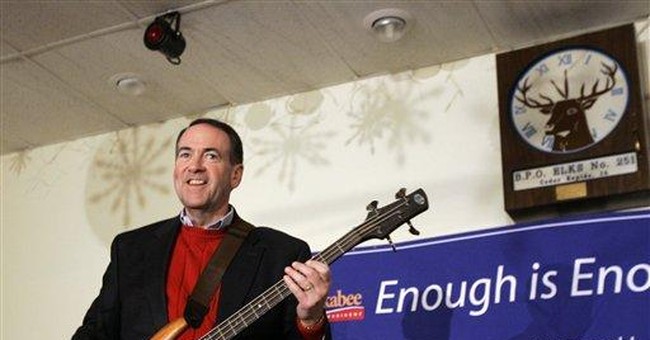 The Iowa Caucuses will be held tomorrow night and there should be some clear results by about 9 PM Central time and some clearing of both the Republican and Democratic fields shortly after.

Last night I had dinner with two senior political reporters which included a drop-by with a senior political operative for one of the major Democratic candidates. The rule of the encounter was we are "on background" meaning no names, no affiliations.

For all of the press coverage about how GOP caucus-goers in Iowa are undecided about who should come out on top of the stack, among the three people at the table who knew what they were talking about, there is absolutely NO way to sort out what the order of finish will be among the top three Democrats.

According to the Dem political guy, if the turnout on their side (which, it is generally estimated, will be in the 120,000 range) climbs to about 180,000, that will mean a victory for Sen. Barack Obama because it means he has brought tens of thousands of Iowans into the process who had not previously been involved.

If the turnout is at the low end of the scale, it will probably mean very good news for former Sen. John Edwards because he has been here the longest and Iowa Democrats are most comfortable with him.

Sen. Hillary Clinton, then, may well come in first if the turnout is about 150,000 - still a huge number by Iowa caucus standards.

None of the three at the table was willing to bet who would finish first, second, or third on the D side of the ledger tomorrow night. On the Republican side [remember, I am a paid consultant to the campaign of Sen. Fred Thompson] there was considerable chatter about the more-odd-than-usual-even-for-Iowa news conference held by Gov. Mike Huckabee the other day when, because no one else was in Des Moines, hundreds of reporters packed into a ballroom at the downtown Marriott to hear Huckabee announce he was no longer going to run negative ads.

And then Huckabee proceeded to show the reporters the very ad he was not going to run.

This was met with an outburst of derisive laughter on the part of the gathered reporters, but Huckabee went on and it is unclear whether Iowans thought this was as cynical a political trick as the national press corps did.

Nevertheless Huckabee (who has, relatively speaking, spent $11.37 in Iowa) and Gov. Mitt Romney (who, according to the Professional Guessing Class, may have spent upwards of $8 MILLION here) are more-or-less tied for lead in pre-caucus polling.

Thompson and Sen. John McCain are generally seen as tied for third going into the last 36 hours of the caucus campaign.

Former Mayor Rudy Giuliani, notwithstanding a couple of debate appearances and some direct mail, is not seriously competing here.

Huckabee is depending upon outside groups - mostly churches - to get voters out to their local caucuses. Romney has paid for a massive "ground game" here to (perhaps literally) drive his supporters to a caucus. Thompson has a traditional mix of paid staffers and volunteers manning phone banks to get their supporters out.

McCain, as nearly as anyone can tell, has no turn-out operation in Iowa meaning his supporters will show up with no organized urging.

Thompson is in the next-to-last day of his 50-city tour around Iowa where he has drawn good crowds who are exhibiting, as one reporter said to me yesterday, more whoops and hollers when he is introduced and appear to be more enthusiastic about his message.

As he described it, if someone wants to be a stock broker he or she can make an excellent living in Des Moines or Davenport. But if they want to be among the top people in their industry they have to move to Dallas, or Chicago, or New York.

Farmers who plant a corn seed in the Spring have to wait months before that seed sprouts, grows, flowers, fruits and is ready for harvesting.

No amount of shouting, stomping around, and exhortation will speed up that process so Type A personalities don't tend to stay in farming.

It may well be, this reporter held, that Thompson's personality matches up better than anyone else's in the GOP field with the typical Iowa caucus-goer.

We will all be a great deal smarter tomorrow night.