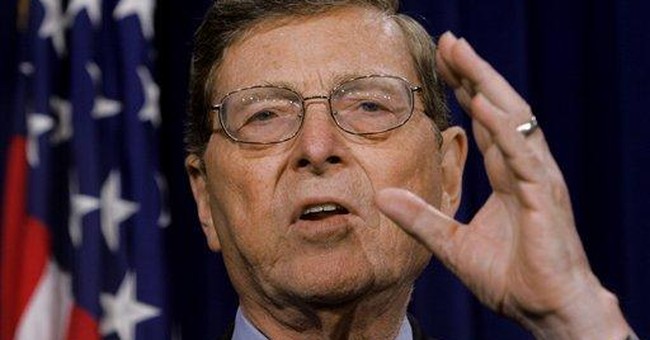 * US Senator Pete Domenici (R-NM) has announced he will not run for re-election because he is suffering from a disorder known as Frontotemporal Lobar Degeneration which is a disorder of the brain leading to a "group of progressive dementias that result from decline in brain cells which control behavior, thinking and communication."

* Pete Domenici was first elected to the US Senate in 1972. Just to remind us how long ago 1972 is; here is an entry from the "Information Please" website:

* I don't think that Sen. Pete Domenici (R-NM) would have known me by seeing me at any point over his past 36 years of public service, but I have been an admirer of his because one of the tests of a really good public servant is not just the work he or she does, but the people that they gather around them and who stay with them.

* Domenici has had great people around him - such as his Chief of Staff Steve Bell - for most of his Senate career.

* I had no idea what was going on, but Domenici did and so did Bell. Domenici used his great talents to devise the first Republican budget in decades. Bell worked hard to help me understand what I was watching so I could pass that information along to reporters covering the freshman Senator from Indiana.

* It wasn't just me. Even the Santa Fe New Mexican wrote:

"Sen. Domenici is one of America's premiere lawmakers and statesmen. His work on the federal budget, both as a minority and majority senator, has been exemplary."

* Santa Fe, as those of you who may have spent more than 17 seconds there know, is not exactly a hot-bed of Conservative thought.

* The Domenici/Quayle connection continued until an afternoon in August, 1988 in New Orleans when the Republican nominee for President, George H.W. Bush, announced he had chosen Quayle to be his Vice Presidential running mate.

* There are many who believed that the man who finished in second-place to Quayle in the VP sweepstakes was Pete Domenici.

* The Senate, which is receding in support among Americans under the leadership of men like Harry Reid (D-Nv) and Chuck Schumer (D-NY), will be weakened by the loss of Pete Domenici - a man of principal, courage, intelligence, and above all patriotism.

* Speaking of Harry Reid, his attack on Rush Limbaugh speaks volumes about the damage the MoveOn.org people have done to the Democrats in Congress.

* Briefly, ABC News reported on men who claim to have served in Iraq or Afghanistan, claim to have been awarded medals for bravery, and claim to have witnessed atrocities by coalition forces - only to find out they have never been any closer to the US Military than reading a Sgt. Rock comic book in junior high.

* These miscreants have been named "phony soldiers" which is the term Rush used to describe them.

* A left-wing blog misquoted Rush and accused him of, in effect, saying any soldier who disagreed with US policies in the region were "phony soldiers."

* Rush's point was that the Popular Press will report anything that anyone claiming to be a soldier says so long it is in opposition to Administration policy without even the most modest fact-checking to see if the person making the claims (a) ever served or (b) the events they described ever happened.

* Mullsters of the world unite! We are faced with political opponents who, as both the Limbaugh and Domenici cases have shown, have no sense of civility, respect, or decency in their attempts to take control of the American political process.