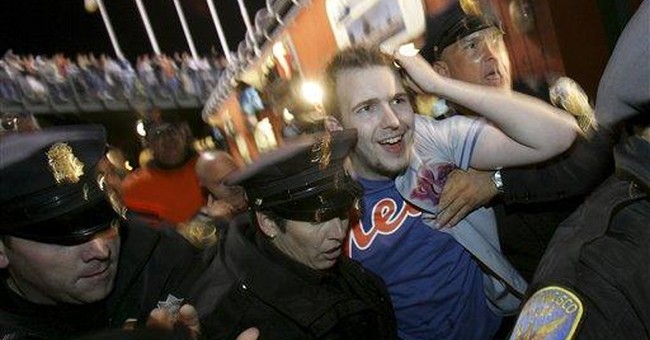 The Washington Nationals will go down in baseball history as being the team against which Barry Bonds hit his record-breaking 756th major league home run.

For those of you who may not be baseball fans, there are a few records which are revered, two of which were held by Babe Ruth: Home Runs in a season - 60; and most home runs over a career - 714. Another is the 56 game hitting streak by Joe DiMaggio and a fourth is most consecutive games played (Cal Ripken, 2,632 breaking Lou Gehrig's 2,130).

It is useful to remember that Ruth started his career with Boston as a pitcher. And he was a pretty fair pitcher. For instance, he still holds the record for the longest complete game in a World Series - 14 innings. In the modern era a pitcher is carried out of the stadium on his teammates' shoulders if he gets through the seventh.

That was the same year that the most famous record in American sports - 60 homers in a season - was broken by Roger Maris of the New York Yankees. Ruth had hit his 60 home runs in 1927 but back in those days the Major League season was 154 games. Maris hit 61 in the modern 162 game schedule and so Commissioner of Baseball Ford Frick (No. Really. That was his name) decided to add an asterisk to Maris' 61 to indicate he had needed eight additional games to break Ruth's mark.

When Henry Aaron broke Ruth's career record, in 1975, it was a different time in America. It was a time when someone's race still mattered to everyone. Ruth, of course, was White as was every Major League baseball player until Jackie Robinson played for the Brooklyn Dodgers in 1947 - only 27 years earlier.

So, it came to Tuesday night and the Washington Nationals were in San Francisco - two teams with no prayer of making the post season, but which were destined to make the history books.

Barry Bonds is not generally known as a pleasant person to be around - if you happen to be another baseball player or a sportswriter.

He is also rumored to have used steroids to enhance his performance and his physical size.

There are 30 Major League teams. Each has a roster (for most of the season) of 25 players. At any given time there are 750 players on Major League rosters.

To avoid making myself crazy, let's assume that the rosters are static for the entire season - meaning no one gets hurt, traded, retires, or thrown in jail.

Bonds is in his 21st season. Some 15,750 names have appeared on Major League rosters in those 21 years.

Only one has hit 73 home runs in a single season. Barry Bonds.

Only one has hit 756 home runs in his career. Same guy.

He may be a jerk. And he may have used steroids. But no one else - no matter what their personality nor their pharmacology - has done what Barry Bonds has done with a bat.

The Nationals won the game 8 - 6 and, as of this writing, are only nine games below .500 and are tied for fourth in the National League East.