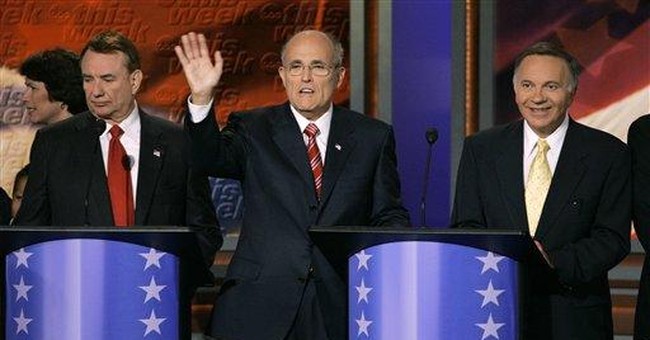 This weekend the Republican candidates for President got themselves up, shaved, dressed and ready for an ABC News debate from Des Moines, Iowa. The Democratic candidates attended a convention of left-wing Bloggers at the "Yearly Kos" convention in Chicago.

I don't know how many people watched the ABC debate, but I wasn't one of them. First of all, I didn't know that there was a debate yesterday. Second, my Sunday mornings are typically given over to taking Titus the Granddog out for a long and exciting game of Chase the Tennis Ball, and cooking breakfast for the Mullings Director of Standards & Practices.

Consider what would have happened if Republican candidates blew off a meeting with a moderate Republican organization to attend the "Vast Right-Wing Conspiracy Nuts Convention" in, say, San Diego or Charleston.

Can you imagine how the Popular Press would have vilified the GOP candidates? It would have interviewed every single attendee and found something which would have shown him or her to be (a) a lunatic, (b) a hypocrite, (c) an embarrassment, or (d) all of the above.

The Democratic candidates for President all refused to attend a meeting of the moderate Democratic Leadership Council (of which Bill Clinton was a charter member) but, went out of their way to attend a convention of the most acidly Liberal group of Bloggers in American all of whom are either (a) lunatics, (b) hypocrites, (c) embarrassments, or (d) all of the above.

The growth and power of Bloggers is, as we have discussed here before, something the Popular Press is going to have to answer for ere long. The Popular Press treats Bloggers not like the narrow, self-absorbed, dying-to-be-quoted, unqualified nerf-balls they are; but as if they are pool reporters.

Before this cycle is over, some major reporter is going to lose his or her job because he or she depended on some dope Blogger for information which was misconstrued or outright invented.

Nevertheless the Democratic candidates for President bowed, scraped, pandered, and supplicated themselves before a bunch of people who think Democratic Members of the House who voted in favor of the bill to allow surveillance of suspected terrorists as "Dems who ... failed us. Who failed our country."

One Senator who voted for the bill, Ken Salazar (D-CO) was vilified by a Kos Blogger thus:

Senate (sic) Salazar was the first dem I ever voted for that WON. I was so happy! I did my part! And he's a freaking Liebercrat surrender monkey.

These are the people with whom the Democratic candidates for President are not only willing to align themselves, but from whom they are actively seeking support.

Too many members of the Popular Press are in agreement with Left-wing Bloggers, and so either don't report on what they say or report it in the most gentle, and positive way.

The LA Times, for instance, headlined the appearance by the candidates: "Democratic Hopefuls Try to Woo Bloggers" as if the Bloggers in question were no different than soccer moms and divinity students.

According to the Washington Post's Jose Antonio Vargas, "the leading bloggers are in their 20s and 30s" which happens to be the age group which blathers most, but votes least. Nevertheless some 250 members of the Popular Press attended the convention of Liberal Bloggers showing that the old saying, "Opposites Attract" may be true in the physics of magnetism, but not in the reality of modern American politics.

Isn't MULLINGS a kind of Blog?

The Association of On-Line Publishers