I Need Some Advice 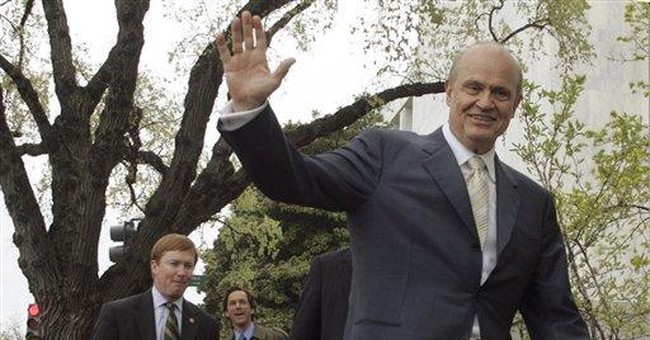 Veteran Republican operative Rich Galen has signed on as a senior advisor to former Sen. Fred Thompson, R-Tennessee, who is exploring a bid for the GOP presidential nomination.

"Assuming he gets into the race, I think Fred Thompson may well be the best combination of insider-outsider experience and possess the kind of new ideas that don't exist in either party," Galen said.

Thompson is expected to make a formal announcement after Labor Day.

Ok. I'm on the payroll. I can no longer be on CNN's Strategy Session with Wolf Blitzer against James Carville, Donna Brazile or Paul Begala. And, I did my last Weekend Live segment on Fox with sparring partner Bob Beckel this past weekend.

The reason is: Viewers cannot be expected to believe that I would be an unbiased observer of the GOP primary race if I am being paid by someone who may be participant.

So, TV is out. My proposition to you is this: I will continue to write MULLINGS (although I will cut back to two-days-per-week during August as I have done for the past several years).

For the same reasons I won't be doing TV, I will refrain from using MULLINGS as a campaign tool for Fred Thompson if and when he becomes a candidate.

Those of you who stayed with me during the Iraq adventure (which you should read from the bottom up) you might find it interesting to know that after the first one or two, neither the Departments of Defense nor State, nor any other entity thought they needed to edit my stuff before I sent it out, meaning they understood that you understood (a) I was not writing in my official capacity, and (b) I wouldn't give away anything which might get someone injured or killed.

I don't believe there is a conflict if I write about the Democrats' campaigns. Nor do I think there will be a problem writing about the 14%-approval-rated Congress as long as everyone understands that in all cases MULLINGS reflects my views alone and should not be considered to be an official (or unofficial) reflection of the Thompson operation.

There are also matters of high culture like Harry Potter and Paris Hilton.

I went to see the latest Harry Potter movie which I thought was excellent, but in retrospect I think I slept through more of it than I had originally thought and so might have to sneak out and see it again.

I also bought the latest (and last) Harry Potter book on CDs which took from an hour before game time until the 7th inning of Saturday's baseball game between the Washington Nationals and the Colorado Rockies to transfer to my iPod.

See? These are the kinds of cutting-edged social commentaries which can continue unabated.

I am excited about working with Fred Thompson and the group which is gathering around him. I am looking forward to helping you peek behind the curtain (when it doesn't compromise any internal activities) to better understand what happens in a big-time Presidential campaign if and when Thompson becomes a candidate.