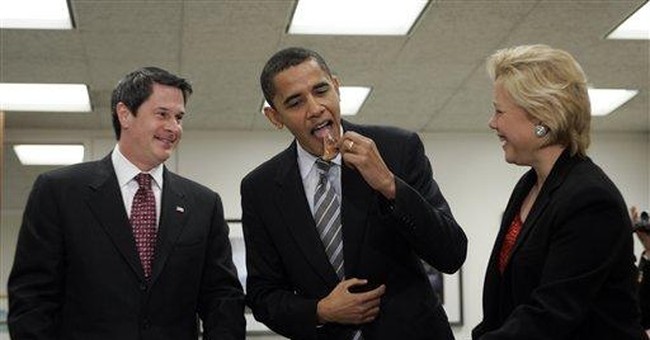 Bring out the Polident, the cots and the Depends, boys, Majority Leader Harry Reid (D-Nev) declared the US Senate (average age 173 years, 2 months, 17 days) was going to stay in session all night to demand a vote on an amendment to demand a date certain for the withdrawal of troops from Iraq.

In a Washington Post piece headlined: Senate Orders the Pizza, Rolls Out the Cots for Debate writers Shailagh Murray and Paul Kane reported that "reporters were alerted when beds, along with pillows, were delivered in the afternoon. Senate Majority Whip Dick Durbin (D-IL) office dispatched interns to buy toothpaste, toothbrushes and deodorant..."

Sen. John Kyl (R-AZ) said: "The Democrats' all-night debate is nothing more than a publicity stunt - as Democrats have freely admitted."

Republicans have demanded the Democrats produce 60 Senators who want to legislate military tactics by demanding a vote on an amendment to the Pentagon authorization bill that would require troop withdrawals to begin in 120 days.

That is in contradiction to an earlier agreement to wait until General David Petraeus reports to the Congress on September 15th on the success of the surge.

Even CNN called the move "a bit of political theater."

At 10 PM Sen. Mary Landrieu (D-LA) took the floor whining about the fact that the Republicans were calling the all-nighter "a stunt."

"This is not a stunt," she said, quaking with as much righteous indignation as a Senator from Louisiana can muster. And then she had an aide put a patriotic poster up next to her at her desk on the floor that proclaimed the words, "Let Us Vote."

Sen. Barak Obama (D-IL) bought into the stunt by signing up for his floor-debate time for, according to the Post, "between 6 a.m. and 7 a.m., just as the television networks' morning news programs start their broadcasts."

Sen. Hillary Clinton (D-NY) will not, I guarantee you, hesitate to throw a hip under the hoop and get into the debate sometime during the morning news programs as well.

Forbes.com wrote that the stunt was an "attention-grabbing, all-night session Tuesday...but [Democrats] conceded they were unlikely to gain the votes needed to advance troop withdrawal legislation blocked by Republicans.

Is politics involved? How dare you suggest. Again, from Forbes:

MoveOn.org, the anti-war group, announced plans for more than 130 events around the country to coincide with the Senate debate… A candlelight vigil and rally across the street from the Capitol was prominent among them, with House Speaker Nancy Pelosi, D-Calif., expected to attend.

Memo to the Speaker: We don't think showing up at a candlelight vigil will satisfy Cindy Sheehan's demand that you begin impeachment proceedings by the end of next week. Prepare for a primary challenge.

Articulating how serious this really is, Sen. Joe Lieberman (D-CT) said "it is perverse that on the very day we have received a National Intelligence Estimate drawing a direct link between al-Qaeda" to Iraq, that we should be debating an amendment to retreat from Iraq.

"Mr. President," Lieberman said during his floor speech, "I know cots have been brought in so Senators can sleep, but I hope the Senate wakes up to the threat we are facing … It's time to stop dreaming that a mandated withdrawal is anything more than a mandate for defeat."

It is also time that Democrats in Congress and those running for President stop using the war on terror as nothing more than a tool to raise money from the American Left.