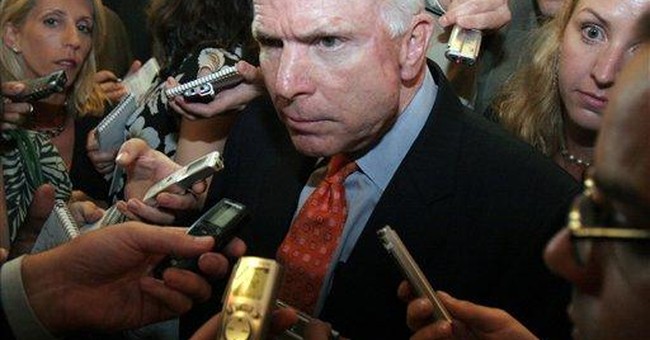 The Presidential campaign of Sen. John McCain (R-Az) imploded yesterday when, according to the Politico.com's Jonathan Martin:

Because I measure everything in the world on one axis, "How does this affect me?" this makes my life someone less complicated.

In addition to the two heavyweights mentioned in Martin's blogs, two other senior staffers, the deputy campaign manager and the political director, also resigned at noon yesterday.

For the record, the Deputy Campaign Manager for McCain had been, The Lad.

With him out of the McCain campaign, I no longer have to measure what I say or write against what I know from published sources and what The Lad might have shared with me, in father-son conversations.

So, once again, this is all about me.

When you get involved in a Presidential campaign you know there are there are a number of potential outcomes; almost all of them are bad. Only one outcome leads to your candidate winning being sworn in at noon on January 20th on the steps of the US Capitol.

Sometimes a campaign ends with a crushing defeat in a primary like Howard Dean in the 2004 Iowa Caucuses. Coming in third was very pyrotechnic - if not stereophonic - for Dean, but campaigns more commonly end with a whimper, not a scream.

Dick Gephardt came in fourth in Iowa and quietly folded his tent and went home.

The most common outcome at the Presidential level is this: The campaign runs out of money, messages and momentum and the last person remaining simply turns out the lights, turns in the keys, and turns to a new career.

Everyone knows the income and cash-on-hand (CoH) levels of the major campaigns. The McCain campaign made news last week when it announced it had raised just over $11 million and had only $2 million CoH.

The two mill was noteworthy because campaigns need to build cash accounts to pay for advertising starting sometime in the fall, but seriously immediately following the Christmas shopping season. A campaign with only two million in the bank is not likely to be able to make much of an impression as the barrage of political advertising starts in all of early primary states.

According to Des Moines Register columnist Dave Yepsen is likely that a candidate will be chosen in the three weeks between the Iowa caucuses and über-Tuesday, February 5:

Current plans call for the [Iowa] caucuses to be held Monday, Jan. 14. The new Nevada caucuses come Saturday, Jan. 19, although no one seems to be paying much attention. New Hampshire's primary comes Tuesday, Jan. 22, followed by the South Carolina [and Florida] contests on Jan. 29.

Dozens of other states are planning primaries on Feb. 5, and it seems quite we will know who the two major-party nominees will be by the morning of Feb. 6.

What is not known - at least not to me - is the level of outstanding short- and long-term obligations that the McCain campaign will show on its July 15 report.

Every campaign has some debt. You don't pay your rent in advance, the telephone bills are paid sometime after the calls are made, charges to campaign credit cards are often made well before the monthly billing cycle is complete, and so on.

The true test of a campaign's financial condition is: Cash-on-hand plus planned fundraising minus on-going expenses and unpaid obligations.

I have no idea what will happen to the McCain campaign now. I suspect it will continue to drift downward, but that depends upon the release of the official filings for the second quarter on July 15.

If the McCain campaign's balance sheet shows that it is serious - or even modestly - under water then it is hard to see how the campaign can continue. What will continue is finger pointing and emails to reporters and Bloggers making certain everyone knows whose fault this wasn't.

Politics, as has been said before, ain't beanbag.