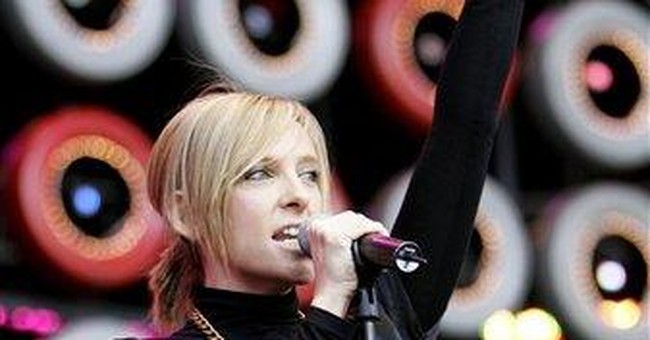 Let's be fair about this: Live Earth was a tremendous success. Although exact figures are hard to find, some 10 million watched the webcast of some or all of the concerts and "hundreds of millions more" watched on television.

One of the reasons the Earth may well be warming (in addition to that pesky sunspot cycle) is that we measure the success of events like Live Earth on the metric of how many people sit on their butts watching their computer or television screens, burning billions of watts of electrical energy which require who knows how many tons of fossil fuels to produce.

Not to mention the silos of hops and barley that went into making the giga-gallons of beer which were shipped to all corners of the nation on trucks and trains, and consumed at the concert sites as well as by the millions of people sitting on their butts in front of a computer or TV screen.

I am in favor of the Earth not catching fire one day and becoming a 25,000 mile circumference cinder. As I was on airplanes all day while the Live Earth Concerts were going on. I was, like many of the acts who performed at the concerts, leaving my own personal carbon footprint in the stratospheric walk of shame except, unlike many of them, I flew commercial.

Back to the central point. It is one thing for Smashing Pumpkins (or some other group whose first note I have never heard) to ask people to use energy saving light bulbs in our homes.

Mullings Central already uses those bulbs which look like glass Slinky toys. It would have been something else to have figured out something for the "hundreds of millions" of people to have done that very day.

I have an idea for next year: Every person who watches a Live Earth II concert has to promise to plant one tree.

If three hundred million people did that every year, it would have a positive effect on CO2 levels, wouldn't it? Not so much as to completely offset the damage done by Al Gore, the entire membership of the US Congress and most of the population of Malibu flying around on private jets, maybe, but it would be something everyone could point to and say, "I did that."

And, next year everyone could promise to plant another tree and get one other person who was not watching to plant a tree, as well.

In three or four years there would be a Carl Sagan-esque number of new trees inhaling carbon dioxide and exhaling oxygen: Billions and billions.

It's hard to point to a lamp in the den with a light bulb which is one errant elbow away from creating a toxic waste site from mercury poisoning and thinking "I've done my bit for the planet." And, what would I do next year; point to two lamps in my house?

Not only that, but next year the lamps will be the same size as they were this year. All those trees - or at least a huge percentage of them - will be bigger next year and the year after that bigger still.

Some of the coverage of Live Earth was unintentionally amusing. One report from the NY Times told of the point during the concert at Giants Stadium in New Jersey "when Al Gore bounded onto the stage wearing jeans and a black shirt."

Gore in a black shirt: A human eclipse of the sun.

Another bit of unintentional irony was when Robert F. Kennedy, Jr. exhorted the same crowd to "get rid of all those rotten politicians we have in Washington, D.C."

First, one assumes he was tacitly exempting his Uncle Ted. Second, holding an eco-friendly concert in New Jersey is an amusing concept on its face.

So, on this Live Earth weekend, I was in Seward, Alaska where I made my way to the local glacier, hiked up the side of the mountain (down which it still flows) and, like Clark Griswold at the Grand Canyon, looked at it.