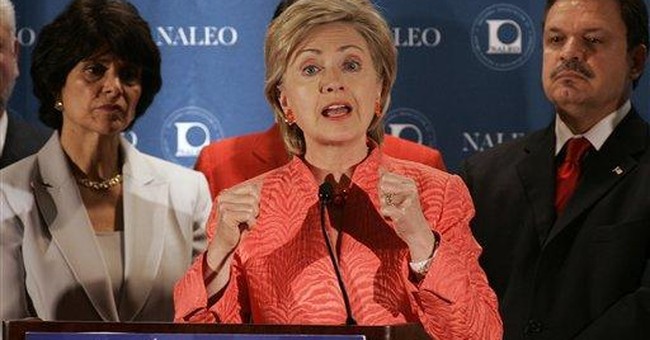 If, like me, you watch CNBC (since the demise of the Imus in the Morning program on MSNBC) you know that we are at what is known as "earnings season" when publicly traded companies report their quarterly results.

Presidential campaigns are doing the same thing. And the first reports are nothing short of astonishing.

To review the bidding, at the end of the first quarter - through March 31, 2007 - Hillary Clinton reported raising some $24 million which stopped official Washington in its tracks. It later came to pass that some five million of that was for the general election period, so her primary election take came to about $19 million. Still a huge amount of money.

In-Ev-It-Tuh-Bull was what the Clintonistas were saying. Hillary's nomination was inevitable. Just look at the money.

The Clinton Strut lasted about 36 hours until Barak Obama's campaign announced it had raised almost $25 million for the primaries.

Ok. A good first quarter for Obama, but since then Clinton has continued to lead every national poll and the Dispensers of Political Wisdom here in Washington have begun to suspect that Obama may have hit his peak and will never get more than about a quarter of Democratic primary voters to support him.

The second quarter ended this past Saturday. The Clinton campaign announced, with some justifiable pride, that it had raised another $21 million for the primary election period.

Obama saw Clinton's 21 mill and raised her 10 million more. The Obama campaign announced it raised a breathtaking $31 million in the past three months for the primary campaign.

In the past three months there were 13 weeks or 65 weekdays. Memorial Day was in there somewhere so that works out to about a half million a day. Every day.

The others will dribble in over the next few days, but the sobering truth is: Democrats running for President raised upwards of $61 million in the past quarter.

It will be a moral victory if the assorted GOP candidates get to half that amount.

What you will be hearing and reading all week is that Obama's money has come largely from small donors. Here is why that is important.

It is an axiom of political fundraising - any fundraising, really - that the most difficult check to get from a donor is the first one. Once a donor has given, he or she is much more likely to respond positively to subsequent requests for funds.

The Clinton campaign didn't release the number of donors which got them to their $21 million, but Obama's campaign made a big deal about the fact that its $31 million came from some 154,000 donors - a little over $200 each.

The maximum any one person can donate to a candidate for the primary campaign is $2,300. Let's say the Rich Galen for President Committee reports total donations of $2,300. And the campaign reports that came from one person.

The RG for Pres campaign better shake the trees for some new donors because that one donor is what we call "maxed out." He can not give any more.

See why the number of donors is so important?

The Clinton campaign will remind everyone in their Rolodex that (a) she still leads in all the national polls, and (b) it's the number of votes in the caucuses and primaries which will determine the nominee, not the amount of money in the bank.

If political fundraising were poker that would be the equivalent of the previous hand's losers saying, "Shut up and deal."

Presidential campaigns stay alive as long as there is money in the bank. Barak Obama has enough money to stay in this thing for a long, long time - maybe all the way to Denver next August.