A New Yorker in the White House? 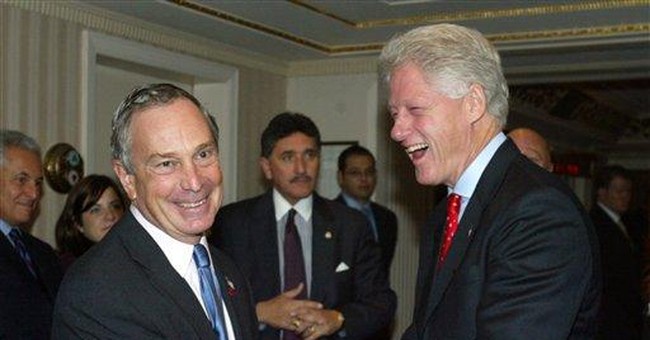 Mayor Mike Bloomberg has loudly, continuously, seriously (but not terribly believably) announced that he is not, under any circumstances, can't even understand where this might have come from, running for President of the United States.

Forget about the fact that last week he quietly - Quietly. The only thing missing was a 1930's style ticker tape parade down Broadway - changed his official registration from Republican to Independent.

Forget about the fact that he did that, not while he was standing on the steps of Gracie Mansion, not even when he was sitting in his office. He did it while he was in California where (a) Arnold Schwarzenegger works and lives and (b) where The Mayor and The Governor ended up posing for the cover of Time Magazine.

According to my close calculations, Bloomberg's non-entry in to the 2008 Presidential race raises to three the number of New Yorkers who are now in that contest.

According to the US Census, there are slightly more than 19 million people who live in the State of New York. According to the data about a quarter of those are under 18, so they are not qualified because the Constitution requires a minimum age of 35. For the sake of argument let's pretend that another quarter of the 19 million are between 18 and 33. That's half the population or about 10 million who are denied the Presidency because of, as PG Wodehouse's Bertie Wooster might have put it, the old anno-domini.

If there are 12 million illegal aliens living in the US and New York accounts for about seven percent of the total US population, then we may assume seven percent of the 12 million live … in New York - there go another 800,000 New Yorkers out of the Presidential pool on the theory that someone who is not eager to open a checking account for fear of being caught, is not likely to show up on a ballot as a candidate for President.

The Constitution, as Arnold so well knows, requires that a candidate for President be a natural born citizen. According to the Pew Hispanic Trust "the population of naturalized citizens in the United States reached a historic high of nearly 13 million in 2005."

Ok. Accounting for rounding that's another 800,000 New Yorkers who are Constitutionally barred.

About 6 million people in the US are convicted felons who are - for the sake of this discussion - ineligible to run. That is another 400,000 off the butterfly ballot.

Of the remaining, there are 6,999,997 New Yorkers who are disinclined to fill out the paperwork, have to be at work too early, or have just been in a bad mood every day since 1967 and simply do not want to run for President, so fuggeddaboudid.

That leaves precisely three New Yorkers who are qualified and/or willing to run for President in 2008. As luck would have it, Rudy Giuliani, Hillary Clinton, and Mike Bloomberg all appear to be in the race.

All three could end up in the general election: Hillary as the Democrat; Giuliani as the Republican and Bloomberg as the Independent.

Mayor Bloomberg is listed (in the Forbes' list of billionaires on the planet) as number 142 with $5.5 billion of the 891 billionaires when that list was compiled.

If it is true that this campaign is going to cost the biggest spenders about $100 million over the two-year cycle, Bloomberg can run - constantly - until the year 2117. And that assumes he never earns another cent.

By then Bloomberg would be 175 years old, but there is no Constitutional upper limit on age.

This is just idle conjecture, as you know. Having three candidates from New York is just about as likely has having two guys from Tennessee facing each other in the general.