First, Secure Your Base 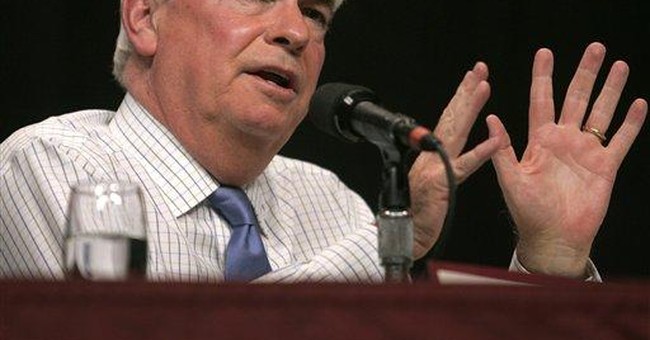 There are some rules which are so important that even people who are in a different profession know them.

In politics the first principal is: "Secure your base."

In medicine the obligation taken by physicians to "First, do no harm" is known to everyone (incorrectly) as the central theme of the Hippocratic Oath.

And, of course, in space travel, the Prime Directive of Star Fleet Command is to never interfere with an alien culture ("alien" in this usage refers to someone who is a Ferengi, not someone who is a Mexican).

The Dems are driving a wedge between Washington and the Liberal base over funding for Iraq. Putting aside the policy issues, there was no procedural reason for House Speaker Nancy Pelosi (D-Cal) and Senate Majority Leader Harry Reid (D-Nev) to continue to send funding bills to the President with a timetable for withdrawal.

The Left Wing of the Democratic Party - its base - is very vocal in its opinion that Pelosi, Reid, et. al. surrendered to President Bush on the war funding bill.

On the other side of the aisle, the White House is vociferous in its support of a massive change to the nation's immigration policy which the Right Wing of the GOP sees as nothing less than amnesty for the 12-20 million aliens illegally in this country. (In this usage "aliens" means people who are Central Americans not Klingons).

Thus, the Bush Administration is driving a wedge between the national policy structure and the GOP's political base.

Neither Bush, nor Pelosi, nor Reid are running for President. The 327 people who ARE running on each side might well see this as an opportunity to adopt an "I'm Not Them" posture ("Them", in this usage, refers to the alien beings in Washington, DC, not Romulans in the Beta Quadrant of the Milky Way Galaxy).

Democratic candidates for President are expected to oppose the policies of President Bush. This is much easier when the President appears to be stuck in the low- mid-thirties in terms of job approval.

Among the major polls taken during the merry month of May Pelosi/Reid's numbers range from a high of 36% (CBS/NY Times) to a low of 29% (Gallup).

With Republican and Democratic power brokers in Washington being held, to misquote Winston Churchill, in minimum high regard by voters on both sides of the aisle, they become a free fire zone for the candidates.

Both Hillary Clinton and Barack Obama voted against the Iraq funding bill, although knowing it was going to pass easily (the vote was 80-14), it was a pretty cut-rate protest on both their parts.

John Edwards ran a television ad on Memorial Day denouncing the vote, but Majority Leader Harry Reid (having earlier reminded everyone that it is easy to tell people how to vote when you are not actually in the Senate which Edwards is not) voted for it.

On the GOP side, my suspicion is that every campaign and pre-campaign has at least one person who reads French on the payroll studying the campaign of Nicolas Sarkozy who, in spite of being of the same political party as Jacques Chirac, successfully won election as the President of France.

Those candidates which have expressed opposition to the proposed immigration bill - all but McCain as of this writing - have plenty of running room away from the President and toward the base.

All-in-all this campaign continues to delight and surprise those of us who have to write about it for a living. Almost as much as having an unlimited supply of Pan-Galactic Gargle Blasters.

You know that minor deal about catching those guys who wanted to blow up JFK Airport? The New York Times decided it was not worthy of front page coverage in its Sunday editions. Nor the second page, nor the third.

The NY Times, in what can only be described as editorializing by placement, put it on page THIRTY, the page after the obituaries and the page before the chess column.

The story broke at about noon, so it wasn't like they couldn't have remade the front page. But it might have appeared to the ladies of the Upper East Side that they were giving a backhanded compliment to the Bush Administration for stopping this plot.

Get me another Pan-Galactic Gargle Blaster.