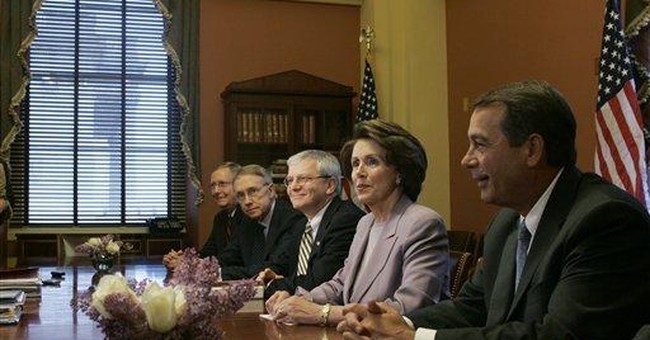 Agreement Near on Iraq Funding Bill

Flinching in the face of a veto threat, Democratic congressional leaders neared agreement with the Bush administration Tuesday on legislation to pay for the Iraq war without setting a timeline for troop withdrawal.[Emphasis Mine]

You may remember me telling you that "A White House, aggressively on message, is the most potent political force on the planet."

It illustrates the point, I remind readers, listeners or the grand dog, Titus (who has taken up permanent residence on the back cushion of the sofa in our den), about 1995 when:

On November 8, 1994 Republicans won 54 seats and claimed control of the next Congress.

On January 4, 1995 the 104th Congress opened with Republicans in the Majority for the first time in 40 years who elected Newt Gingrich as the Speaker of the House.

About April 14, 1995 marked the end of the first 100 days during which all ten items in the "Contract with America" (as promised) came to the House for a vote.

In April 18, 1995 President Bill Clinton held a news conference to remind reporters - who had completely shifted their attention to the GOP on Capitol Hill - that he was still "relevant" to the process.

On September 30, 1995, the fiscal year ended and the Great Shutdown Fight of 1995 began between Gingrich and Clinton.

From April 18, when Clinton held his embarrassing "relevancy" press conference to the end of the fiscal year was only a little over five months. In that time, the Clinton White House, reeling from the mid-term defeat, got its rhetorical legs back under itself and beat back what it successfully sold as the Gingrich-led Republican assault on Medicare.

According to a NY Times analysis by Carl Hulse in April, 2007:

"Almost from the beginning of the budget fight in 1995, Clinton's poll numbers edged up and those of Gingrich dipped as the public perceived the President as the one trying to resolve the problem and Republicans as inflexible."

The Clinton White House had a potent communications operation. The Bush White House does not.

The Clinton White House had the ear of the national press corps. The Bush White House does not.

Nevertheless, the Democrats in the House have surrendered on Iraq. They will be permitted to save face by tacking a minimum wage increase on to it, and a few of the tens of billions of dollars of domestic add-ons in the bill which President Bush vetoed but, more importantly, there will be no timeline for withdrawal.

Despite the bluster and bother of Pelosi and her allies on the Left could not defeat Bush on Iraq funding.

As Noam Levey pointed out in an LA Times piece, the Pelosi retreat "reflects the simple mathematics of a closely divided Congress in which Democrats cannot muster veto-proof majorities for any proposal that would compel a pullout."

A couple of weeks ago when the MoveOn.org leadership (which quite properly believes it has bought and paid for the House majority) sent an open letter to Congressional Democrats which, according to the NY Times included this:

"If Democrats appear to capitulate to Bush - passing a bill without measures to end the war - the unity Democrats have enjoyed and Democratic leadership has so expertly built, will immediately disappear."

Well, boys, it looks like the capitulation is upon us.

It would be interesting if the Popular Press tracked down the MoveOn folks to ask them exactly when we should expect that "immediate disappearing" business to begin.

So the teaching point today is: Even a weakened White House which is not aggressively on message is still a more potent political force in the United States than the majority in the House, in the Senate or both.

On a the Secret Decoder Ring page today: A clip from the Clinton "relevancy" press conference, and links to the NY Times, the AP, and the LA Times articles referenced above. Also a silly Mullfoto and a Catchy Caption of the Day.