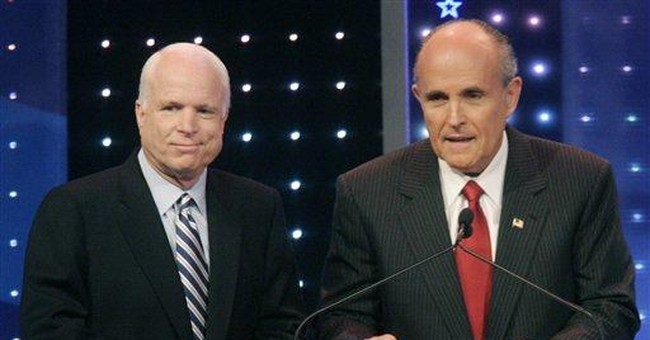 Shorthand: Giuliani helped himself. McCain performed well. Huckabee did well enough so that the big three is now the big three and a half. Giving Romney the kindest review, he came out where he started, but I suspect he may have hurt himself by appearing too pre-programmed in his answers.

In the press filing center outside the event site, it had been all about Rudy Giuliani all day in the run-up to last night's debate.

What would he say about abortion? Can he win the GOP nomination with a pro-abortion position? Is abortion as important in 2008 as it has been for the past three decades?

As usual, we were all wrong.

The "A" word was not mentioned until 9:38, when Giuliani dodged it and went after Hillary Clinton. In a follow-up by Chris Wallace, he dodged it again by saying abortions went down 16% while he was mayor.

The Giuliani campaign has signaled a major strategic shift. They will no longer attempt to portray him as a Conservative - which he is not - but will attempt to show that he is a center-right candidate running in center-right country.

That is, of course, a gamble in a Republican primary campaign.

Throughout, Giuliani demonstrated he will stay on the issue of national security. When Ron Paul said that, in essence, it was the US presence in the Middle East which invited the September 11th attacks, Giuliani demanded that Paul take it back. He refused.

John McCain appeared to have found a balance between looking tired and sounding over caffeinated as he did in the first debate. He got another laugh by repeating his line about a drunken sailor e-mailing him complaining that he was tired of being compared to Congress.

Mike Huckabee - who seemed to be in control of his material and his delivery - topped McCain and got off the biggest applause line of the night by accusing Congress of "spending money like John Edwards in a beauty shop."

I thought that Mitt Romney needed to knock a little polish off his performance: His answers continue to make him sound like Hermione Granger in Potions class at Hogwarts.

For example, when Wendell Goler asked Romney about the dangers of illegal abortions he said, "I can't imagine my heart not being rent" by the circumstance described.

I can't imagine anyone being moved by that answer.

Romney then took a shot at McCain for his immigration policy and McCain-Feingold. McCain fired back by suggesting that, unlike Romney, he has held consistent views "which don't change in even numbered years."

The questions by Brit Hume, Chris Wallace and Wendell Goler were very tough, but not the type of Three Stooges finger-in-the-eye questions which the GOP candidates were asked during the MSNBC debate.

Jim Gilmore tried way too hard to get himself higher in the story by accusing his opponents of being "liberal" in their claims of conservatism in the California debate. He then got the words "blog," "web site," and "New Hampshire" into his answer, but few people will go to his web site to read his blog whether he is in New Hampshire or in Alexandria, Virginia where he lives.

Tom Tancredo got his share of questions, but pretty much disappeared as he was answering them.

Tommy Thompson tried very hard, and succeeded, in not making the kind of mistake he made in the California debate on the question of firing gays.

Duncan Hunter has no stage presence and, even though he is very knowledgeable about how the Pentagon works, he doesn't have the capacity to connect with the audience.

Sam Brownback is a nice guy. Thanks for playing.

On a the Secret Decoder Ring page today: A Mullfoto of the press tent … and that's it. Oh, and a Catchy Caption of the Day.