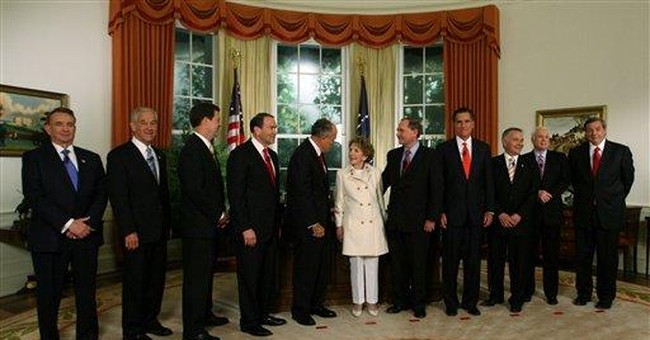 First things first: The Debate Organizers - MSNBC, CNN, Fox, whomever - have to change the rules to limit the number of candidates on stage at any one time to something under the total number of polo players on the field (8) or a Lacrosse team (10).

The second suggestion is to limit the number of questioners to something less than three on-site including John Harris who kept drifting across the stage.

The questions which were chosen by the Politico.com folks were largely ridiculous:

What will you do about the issue of single mothers in prison.

Do you trust the mainstream media?

What is your greatest weakness?

What do you dislike most about America?

The questions by Chris Matthews (after the first 20 minutes on Iraq) were heavily into social issues, leaving one to wonder whether he was - consciously or not - trying to portray the GOP candidates as extremists.

In fact, I got a call from a reporter asking whether I thought it strange that in the library of Ronald Reagan - who was not known as a crusader on social issues nearly as much as on fiscal and security issues - the candidates spent so much time talking about it.

I said: You have to answer the questions as are asked. If Matthews, et. al. wanted to keep coming back to abortion, homosexuality, and stem cells, the candidates had to respond to that.

Speaking of Matthews, he lost control of the debate several times and treated it as an extension of his Hardball program - a major departure from the seriousness with which Brian Williams treated his duties as moderator of the Democrat's debate last week.

At the suggestion of James Carville at Starbucks yesterday morning, I kept track of how many times the name "Ronald Reagan" was uttered by one of the candidates and how many times we heard the name "George W. Bush."

According to my count, the candidates paid homage to Mr. Reagan 23 times. Mr. Bush - by name - was mentioned once, although Bush was referred to as "The President" 14 times and "This Administration" once and a rather strained "the winner of the 2000 election" one time.

Others who got mentions: Hillary Clinton three times; the following once each:

Overall I thought Romney did the best. He had command of his positions and articulated them well. I suspect those who have been wary of his slipping and sliding on abortion and gun control probably feel somewhat better about him because of his smooth delivery. Reading the transcript might not prove as satisfying.

Giuliani kept coming back to his success as Mayor of New York in cutting crime and making the city a generally better place to visit and live. His answer on abortion was far more acceptable than his answer a couple of weeks ago on federal funding, in fact citing the Hyde Amendment as something he strongly favors.

McCain didn't do himself any harm, but probably didn't push the needle ahead any, either. He stuck to his strengths - spending, supporting the military, and the dangers of special interests. In addition, he did appear to be energetic which was probably as important to viewers as any specific answer.

The top 'o the second tier guys: Huckabee, Thompson, and Gilmore obviously had studied and knew their stuff but none of them had the spark that Richardson displayed last week in the Democratic debate.

As for the rest of the field - Tancredo, Hunter, Paul, and Brownback: Thanks for playing.

Final tally? No big winners. No big losers. A long way to go.

On a the Secret Decoder Ring page today: A link to Politico.com just because; a Mullfoto of my score sheet on Bush/Reagan mentions and a silly Catchy Caption of the Day.