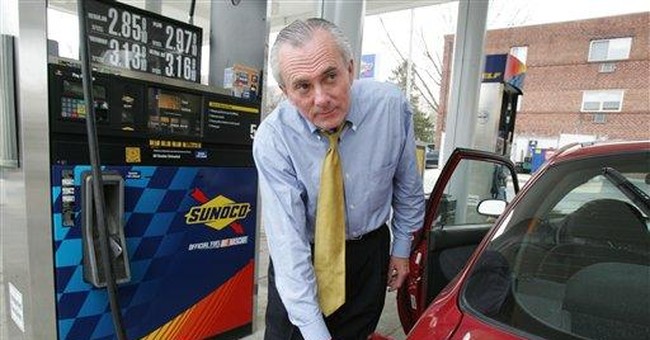 An article in the Wall Street Journal last week points out what happens when public officials depend upon the continued bad behavior of Americans to fund their projects.

The Federal Highway Administration estimates that by 2009 the tax receipts that make up most of the federal highway trust fund will be $21 billion shy of what's needed just to maintain existing roads, much less build new roads or add capacity.

Trying to compensate for highway-budget shortfalls, a handful of states are exploring other, potentially more lucrative ways to raise highway money.

Other ways to raise highway money? That sounds modestly ominous.

Oregon, for instance, is looking at a system which combines a GPS receiver, an odometer, and a recording device. Object? To charge drivers a set price (maybe 1.2 cents) for each mile driven.

No benefits, apparently, for driving one of those hideous Prius hybrids - which alone makes me sort of in favor of this.

Vehicles in the Oregon test have the 24-cent-a-gallon state tax automatically deducted from their pump price and the 1.2 cents per mile fee since their last fill-up added.

If the average fuel-efficiency of passenger cars (according to the US Department of Transportation) in that year was 22.4 MPG then the average driver in Oregon bought 536 gallons of gas. Paying the 24 cents per gallon tax, that would have netted the state government $128.64 per vehicle.

In 2005 there were 3,153,327 passenger cars registered according to the Oregon DMV. The additional 15 bucks per would have meant an additional $4.8 million in revenues to the state.

However, it is not terribly likely that the State of Oregon will front the costs of all this new gizmology. According the Oregon DMV, the necessary devices might cost as much as $255. So, for the state to raise an additional $4.8 million, it would cost Oregonian drivers almost $800 million.

Ok, NOW this is beginning to sound like a government program.

Minnesota, according to the WSJ, is working on a similar system but wants to "refine the technology to make it user-friendly."

Yeah. Right. User-friendly. That means that for a small additional monthly fee you can have the read-out from the systems in the family fleet e-mailed to your desktop, thus allowing you keep track of how much driving your child … or your spouse … is doing.

Speaking of which, the WSJ article mentions concerns about the government being able to track. According to the guy in Oregon running this test, "We don't use the 'tracking' word here because it is inaccurate and upsets people who are worried about their privacy."

Anyone who has a cell phone which is turned on can already be tracked to within a few feet. Those EZ-PASS things that allow us to race through toll booths know where along the road we entered and where we are exiting, so your movements can be tracked that way.

Hold it! I have an excellent idea: The EZ-PASS system knows the distance between Entrance A and Exit B. And the device notes the time of each transaction for auditing purposes.

If Entrance A is at mile post 30 and Exit B is at mile post 60 and the elapsed time is 25 minutes then you must have been traveling at an average of 72 miles per hour. If the posted speed limit is only 55 …

You want to talk about your revenue enhancers! I should work for the DMV.

On a the Secret Decoder Ring page today: A link to the Wall Street Journal article and a similar article from the Seattle Times. Also an optimistic Mullfoto and a fashion-conscious Catchy Caption of the Day.